“Tired of so much winning” yet?

The U.S. Court of Appeals for the D.C. Circuit rejected President Trump’s appeal to block the release of his tax returns to the House Committee on Oversight and Reform. The court’s decision affirmed that the Committee has the authority to subpoena the financial documents of the president and that Trump’s accounting firm, Mazars USA, must comply by submitting the requested information.

President Trump’s accounting firm must comply with House Democrats’ demands for eight years of his financial records, a federal appeals court panel ruled on Friday in a major victory for House Democrats in their struggle against his vow to stonewall “all” of their oversight subpoenas.

In a 66-page ruling (.pdf), the panel rejected Mr. Trump’s argument that Congress had no legitimate legislative authority to seek his business records from the firm, Mazars USA, because the committee was trying to determine whether he broke existing laws — not weighing whether to enact a new one.

“Having considered the weighty issues at stake in this case, we conclude that the subpoena issued by the committee to Mazars is valid and enforceable,” wrote Judge David S. Tatel of the United States Court of Appeals for the District of Columbia.

Mr. Trump is virtually certain to appeal the ruling, either to the full Court of Appeals or to the Supreme Court. But the decision — affirming an earlier ruling by a Federal District Court judge — was the first test at the appeals court level of the Trump legal team’s sweeping challenges to the constitutional authority of Congress to conduct oversight of his activities.

Judge Tatel was joined by Judge Patricia A. Millett in the majority of the three-judge ruling. Both were appointed by Democratic presidents.

Judge Neomi Rao, a former Trump administration official whom Mr. Trump appointed to the bench in March, dissented, saying she would have quashed the subpoena as exceeding the House’s legislative powers.

Neomi Rao is officially Brett Kavanaugh’s replacement on the DC Circuit. She’s faced scrutiny for her writings on sexual assault:

Rao, the Trump administration’s regulatory czar, is widely seen as a rising star in conservative legal circles and could be among those considered for the Supreme Court down the line [oh Hell no!]. During her confirmation hearing in February, she was heavily questioned about some of her college articles about sexual assault, several of which appeared to blame the victims.

“If she drinks to the point where she can no longer choose, well, getting to that point was a part of her choice,” Rao wrote in one piece.

Given how dissatisfied multiple senators seemed with her responses, Rao ultimately wrote a letter to the Senate Judiciary Committee apologizing even further for her past writings. “No woman or man should be subject to sexual violence, regardless of the clothes they wear or how much alcohol they consumed,” she wrote. “I am sorry for anything in my college writings to the contrary.”

Rao, in her role as head of the White House’s Office of Information and Regulatory Affairs, has supported the Trump administration’s rollback of Title IX protections for victims of sexual assault on college campuses. These rules would reduce the mandatory reporting requirements institutions currently face on the matter and require live hearings on sexual assault allegations where accusers could even be cross-examined by a representative of their attackers.

Democrats argue that Rao, as a head of this office, has played a major role in undoing regulations at the Environmental Protection Agency and the Education Department.

“The DC Circuit hears most challenges to federal regulations,” said Sen. Dianne Feinstein (D-CA), a ranking member on the Senate Judiciary Committee. “If confirmed, Ms. Rao could be in a position to decide cases about many of the very regulations that she has personally worked on.”

Rao has previously refused to recuse herself from cases that might involve Trump administration rules that she oversaw, however.

Representative Elijah E. Cummings, the Democratic chairman of the oversight committee, hailed the appeals court’s decision. “Today’s ruling is a fundamental and resounding victory for congressional oversight, our constitutional system of checks and balances and the rule of law,” he said in a statement. “For far too long, the president has placed his personal interests over the interests of the American people.”

Lawyers for Mr. Trump were reviewing the decision, said one, Jay Sekulow. “We continue to believe that this subpoena is not a legitimate exercise of Congress’s legislative authority,” he said. Sarah E. Sutton, a spokeswoman for the Justice Department, declined to comment on the ruling.

[The Trump] legal team has put forth  asinine legal arguments in carrying out his vow to systematically defy House subpoenas.

The Trump legal team has separately argued that Mr. Trump’s current and former White House aides are absolutely immune from subpoenas for their testimony — meaning they would not even have to show up — and that Congress lacks legitimate legislative authority to scrutinize potential wrongdoing in the executive branch.

The appeals court ruling on Friday centered on that third argument, and it was in some respects already obsolete because the premise of the argument was that the House was relying only on its routine legislative and oversight authorities, rather than any extra investigative powers that lawmakers gain when engaged in an impeachment inquiry.

But since the Mazars case started going through the courts, the House Judiciary Committee and Speaker Nancy Pelosi have declared that the chamber is conducting an impeachment inquiry. The Trump administration has disputed that premise, since the full House has not voted for a resolution approving such an investigation.

Friday’s ruling did not address the question of whether an impeachment inquiry is underway — and, if so, whether that even matters. The majority on the panel ruled for the House without any need to invoke its impeachment powers.

Specifically, the fight centered on whether the House Oversight and Reform Committee had the authority to compel Mazars to turn over Mr. Trump’s financial records as part of its routine legislative and oversight powers, even if the committee’s purpose was in part to determine whether Mr. Trump committed crimes.

The committee, led by Mr. Cummings, issued the subpoena after it came to light that Mr. Trump had failed to list on his ethics disclosure forms a debt that he owed and then repaid to his former lawyer and fixer, Michael D. Cohen, for paying hush money to a pornographic actress just before the 2016 election to keep quiet about an affair she claimed to have had with Mr. Trump. He has denied the relationship.

Mr. Cohen also testified before Congress that Mr. Trump routinely changed the value of his assets for different financial purposes, like inflating their value for loan applications but deflating them for taxes. (Mr. Cohen was separately convicted of lying to Congress in earlier testimony.)

In making the request for documents and then issuing the subpoena, Mr. Cummings said that Congress was trying to determine whether the president had broken laws, but he also said that lawmakers were trying to decide whether to update financial disclosure laws.

Mr. Trump’s legal team, which sued Mazars to obtain a court order blocking it from complying with the subpoena, argued that this meant the committee was effectively trying to carry out a criminal investigation. That, they asserted, was an executive branch job, not a legislative one, and so the House’s subpoena was invalid.

But Judge Tatel wrote that Supreme Court precedent granted broad authority to Congress to issue subpoenas for information that could be used to enact new laws — even if it could also be useful as criminal evidence — and imposed no requirement on lawmakers to say that legislation was their specific purpose. In any case, he also wrote, Mr. Cummings had made reference to investigating whether new legislation was necessary.

“We conclude that the public record reveals legitimate legislative pursuits, not an impermissible law enforcement purpose, behind the committee’s subpoena,” he wrote.

Judge Rao disagreed. Lawyers for the House, led by their counsel Douglas Letter, had relied only on the House’s normal oversight powers in support of the subpoena, she noted, arguing that permitting lawmakers to pursue such information without an impeachment inquiry would make it too easy to harass the presidency.

“When the House chooses to investigate the president for alleged violations of the laws and the Constitution, it must proceed through impeachment, an exceptional and solemn exercise of judicial power established as a separate check on public officials,” she wrote.

Judge Rao’s incorrect legal reasoning could quickly and easily be negated with a formal House vote for impeachment proceedings. This will likely occur before this case is ever heard before the U.S. Supreme Court, assuming the court even agrees to hear this appeal.

Judge Rao did not address the House Democrats’ more recent assertions that they are, in fact, already conducting an impeachment inquiry — nor the Trump administration’s claims that there is no such inquiry for legal purposes.

Hence her flawed legal reasoning. Rao simply voted in favor of the man who nominated her to the bench. This is corrupt and contemptible. (see below).

In a letter to Democrats celebrating the ruling, Ms. Pelosi wrote: “The president’s actions threaten our national security, violate our Constitution and undermine the integrity of our elections. No one is above the law. The president will be held accountable.”

Congress is one step closer to getting Trump’s tax records and financial documents. If the U.S. Supreme Court denies certiorari, it’s game over — produce the documents. 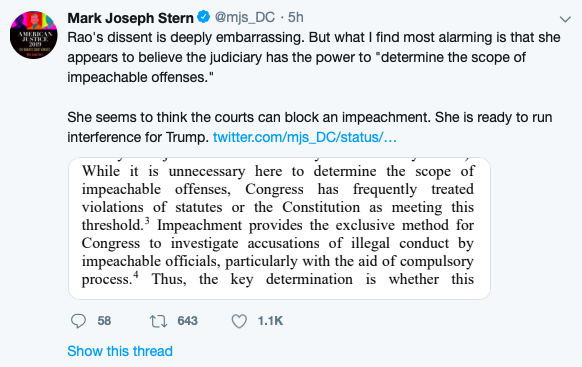