I have previously explained in a series of posts, The conservative media entertainment complex is an ancillary to Russian active measures propaganda.

As the Trump impeachment trial got underway with the House managers presentation of their case, Fox News covered it in a way that gave the appearance of journalism but was actually propaganda. Fox News devised a way to cover the impeachment trial without covering it at all:

In fairness, the network did cover the entirety of Rep. Adam Schiff’s two-hour opening statement. But after that, while CNN and MSNBC continued to broadcast the trial, Fox News turned to spin.

Starting with The Five, the network’s early evening roundtable commentary show, and continuing throughout the evening, Fox News broadcast portions of screen-in-screen video of the trial. But instead of playing the audio, network hosts provided the normal Trumpian spin. So while someone who just looked at the screen may have concluded Fox News was covering the trial, in fact it wasn’t covering it at all.

The network went as far as to broadcast screen-in-screen video of the trial during commercial breaks — but, again, without the sound that was necessary to make any sense of what was being discussed.

Fox News primetime hosts did everything they could to diminish the significance of the impeachment trial. White Power Hour host Tucker Carlson began his show by comparing it to “a movie written and directed by children whose ending you already know, and by the way, it’s 20 hours long, in Hungarian, with misspelled subtitles.” 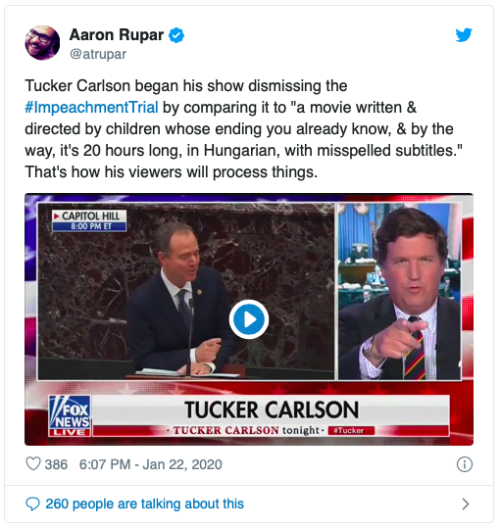 Trump’s Minister of Propaganda Sean Hannity began his show by immediately cutting away from the trial, telling his viewers “none of this will matter,” and describing Schiff as a “lunatic” (a characterization at odds with other primetime segments that criticized the trial for being boring).

Hannity later played a supercut of snippets of Schiff’s testimony that framed things in the most demeaning possible light. 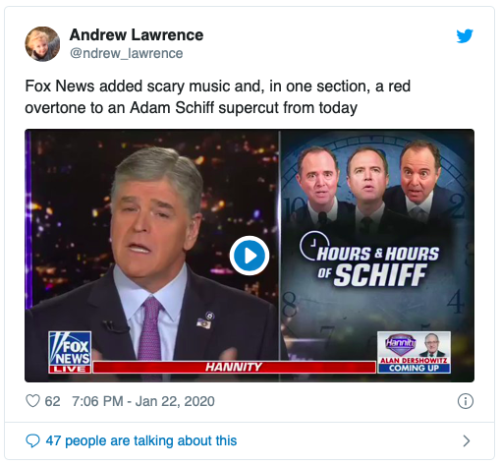 Say what you will about Adam Schiff, but nobody who actually watched his presentation on Wednesday was likely to come away with the impression that he’s insane or, as Carlson suggested, so unlikable he’s incapable of making friends. But those are the takeaways Fox News viewers were force-fed.

Fox News’s coverage of the trial has a circular quality, criticizing Democrats for not presenting new evidence while ignoring the fact that they are unable to do so because of GOP stonewalling. Republican Senators aided and abetted Trump’s stonewalling of Congress by blocking all 11 amendments to the McConnell Rules of impeachment for documents and witnesses on a party-line vote of 53-47. Fox & Friends Suggests Viewers Skip ‘Boring’ Impeachment Trial And Just Get Fox Spin:

Fox News doesn’t want its viewers to watch history in the making with their own eyes and ears, [or to make their own judgment].

Fox News complaints about the “boring” Trump impeachment trial are another sign the network doesn’t think the proceedings are going well for Dear Leader.

[The three dolts on a divan], Fox & Friends, cohost Pete Hegseth said “We watched so that you don’t have to watch the entire thing.”

It started with Steve Doocy cracking up the Curvy Couch Crew with his knee slapper about the heavy schedule: “Luckily, it’s so exciting, it’s going to keep ‘em awake.” He added, “We’re showing you the good stuff – it was unbelievably boring!”

After his “we watch so you don’t have to” bit, Hegseth said, “If you watched it, you felt like you were watching opening arguments. Those haven’t even started yet!”

“Right” the other cohosts said in unison.

Hegseth sneered, “This was just the debate over the rules and I was sitting back and watching last night, thinking this is a circus. And then I thought – and then my [latest] wife, Jen, corrected me and said at least circuses are entertaining.”

“This is just a show, you know how it’s gonna end: 53-47 on every vote,” Hegseth continued. Never mind that Earhardt had just said that some Republicans might cross over and vote with Democrats on witnesses. “Now you have three days to endure of the House managers, the Democrats, making their case,” he said.

“Serious journalist” Earhardt said nothing about the importance of allowing viewers to make up their minds for themselves or the ability to watch proceedings of historical importance. No, she chimed in, “I don’t think the majority of people watched. I think they just turned to us to be able to summarize it for them, because it was so long!”

But I think this Fox & Friends discussion points to something worse than a deliberate effort to turn viewers away from unflattering-to-Trump proceedings. Fox wants viewers to be informed about these historical events only by what they see through the Fox prism.

Remember back in the day when Fox News used the tagline “We report, you decide“? Now they are North Korea’s “pink lady” dispensing state-sanctioned propaganda in praise of Dear Leader telling you what you must think (or suffer the consequences).

Only one person at the Fox News aka Trump TV state-sanctioned propaganda network apparently has not undergone the reeducation camp brainwashing perfected by North Korea: Judge Andrew Napolitano, who has been noticeably absent from Fox’s on-air spin of Trump’s impeachment trial.

In an editorial opinion at Fox News, Judge Napolitano writes Trump’s Senate impeachment trial — What does it take to remove a president? (excerpt):

[This] trial is not a charade or a joke or a hoax. It is deadly serious business based on well-established constitutional norms.

The House of Representatives — in proceedings in which the president chose not to participate — impeached Trump for abuse of power and contempt of Congress. The abuse consists of his efforts to extract a personal political “favor” from the president of Ukraine as a precondition to the delivery of $391 million in military aid. The favor he wanted was an announcement of a Ukrainian investigation of former Vice President Joseph R. Biden and his son Hunter.

The Government Accountability Office — a nonpartisan entity in the federal government that monitors how the feds spend tax revenue — has concluded that Trump’s request for a favor was a violation of law because only Congress can impose conditions on government expenditures. So, when the president did that, he usurped Congress’ role and acted unlawfully.

But, did he act criminally? Is it constitutionally necessary for the House to point to a specific federal crime committed by the president in order to impeach him and trigger a Senate trial?

Here is the backstory.

The Constitution prescribes the bases for impeachment as treason, bribery or other high crimes and misdemeanors. However, this use of the word “crimes” does not refer to violations of federal criminal statutes. It refers to behavior that is so destructive of the constitutional order that it is the moral equivalent of statutory crimes.

For example, as others have suggested, if the president moved to Russia and ran the executive branch from there, or if he announced that Roman Catholics were unfit for office, he would not have committed any crimes. Yet, surely, these acts would be impeachable because, when done by the president, they are the moral equivalent of crimes and are so far removed from constitutional norms as to be impeachable.

In Trump’s case, though the House chose delicately not to accuse the president of specific crimes, there is enough evidence here to do so. Federal election laws proscribe as criminal the mere solicitation of help for a political campaign from a foreign national or government. There is no dispute that Trump did this. In fact, the case for this is stronger now than it was when the House impeached him last year. Since then, more evidence, which Trump tried to suppress [obstruction of Congress], has come to light.

That evidence consists of administration officials’ emails that were obtained by the media pursuant to the Freedom of Information Act. Those emails demonstrate conclusively that Trump ordered a halt on the release of the $391 million within minutes of his favor request, and the aid sat undistributed until congressional pressure became too much for Trump to bear.

This implicates two other crimes. One is bribery — the refusal to perform a government obligation until a thing of value is delivered, whether the thing of value — here, the announcement of a Ukrainian investigation of the Bidens — arrives or not. The other is contempt of Congress.

If the request for the announcement of an investigation of the Bidens manifested “nothing wrong” as Trump has claimed, why did he whisper it in secret, rather than order it of the Department of Justice?

When the House Select Committee on Intelligence sought the emails unearthed by the press and then sought testimony from their authors, Trump thumbed his nose at the House. Instead of complying with House subpoenas or challenging them in court, Trump’s folks threw them in a drawer. Earlier this week, his lawyers argued that those actions were lawful and that they imposed a burden on the House to seek the aid of the courts in enforcing House subpoenas.

Such an argument puts the cart before the horse. Under the Constitution, the House has “the sole power of impeachment.” The House does not need the approval of the judiciary to obtain evidence of impeachable offenses from executive branch officials.

Where does all this leave us at the outset of Trump’s Senate trial?

It leaves us with valid, lawful, constitutional arguments for Trump’s impeachment that he ought to take seriously. That is, unless he knows he will be acquitted because Republican senators have told him so. Whoever may have whispered that into his ear is unworthy of sitting as a juror and has violated the oath of “impartial justice” and fidelity to the Constitution and the law.

What is required for removal of the president? A demonstration of presidential commission of high crimes and misdemeanors, of which in Trump’s case the evidence is ample and uncontradicted.

Well, we won’t be hearing this legal analysis on Fox News anytime soon.

Beginning today, Team Trump will be presenting a Fox News scripted “defense” of Trump crafted for segments on Fox News. I have no doubt that Fox News personnel have been working in tandem with the White House and Trump’s lawyers to script the #Foxgasm shit-show of Russian propaganda about Ukraine and the Bidens that we are about to witness over the next few days.

Unlike the screen-in-screen video of the trial without audio, with network hosts providing Trumpian spin as we have witnessed up until now, this shit-show Russian propaganda spectacle scripted by Fox News will air uninterrupted because it already is Trump TV state-sanctioned propaganda in praise of Dear Leader. Fox News personalities will simply follow-up Team Trump’s performance with superlative praise for Dear Leader and his attorneys to “catapult the propaganda,” as George W. Bush once admitted in an unguarded moment of candor.

Trump’s authoritarian man crushes Vladimir Putin and Kim Jong-Un will be most pleased. Trump is making America more like their corrupt authoritarian regimes every day.

Senator Coverup McSally: Just say no to Uranium Mining in the Grand Canyon

Senator Coverup McSally: Just say no to Uranium Mining in the...

Sharon Girard wants to put Legislative District Eight back in the...