New Book by David Garcia, Arizona Candidate for Governor, is a Blueprint to Dismantle Public Education

Home/AZ Politics/New Book by David Garcia, Arizona Candidate for Governor, is a Blueprint to Dismantle Public Education
Previous Next

New Book by David Garcia, Arizona Candidate for Governor, is a Blueprint to Dismantle Public Education

An upcoming book by Governor candidate David R. Garcia entitled School Choice is a blueprint on how to dismantle public education in Arizona, complete with practical tips on how to implement school vouchers and ESAs (“empowerment scholarship accounts”).

The Blog for Arizona exclusively obtained a review copy of the 196-page book, which will be published one month after the primary elections on September 28, 2018, by The MIT Press.

The book is not an academic work. Garcia says it is for a “general audience” on page 97. It is a how-to playbook for the anti-public-school, pro-school-voucher agenda pushed by Gov. Doug Ducey and the Koch brothers, complete with strategies, arguments, legal precedents to cite, successful examples and historic points of reference.

Garcia is facing Democrats Steven Farley and Kelly Fryer in the primary. Gov. Doug Ducey is running for re-election.

As the 2018 midterms approach, Arizona is one of the biggest political battlegrounds nationwide and public education is a major issue. The Southwestern state features one of the top 9 most important state legislature races in the US in the midterm elections. Arizona is expected to decide the control of the U.S. Senate in this year’s congressional midterm elections.

Book has a strong bias against public schools

David N. Gibbs, Professor of History of the University of Arizona also read the manuscript at my request and pronounced it “disturbing,” because Garcia’s website says, on the one hand, that he wants to “Replace Privatization Schemes with Good Public School Choices,” and that he will “Oppose Vouchers that are harmful, unaccountable and discriminatory in any shape, form or disguise. When elected, David will fight to end voucher schemes.” 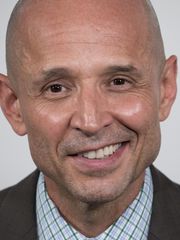 Democratic candidate for Governor David Garcia. He writes, “Arizona parents are regarded as consumers and encouraged to vote with their feet by exiting traditional public schools in favor of charter schools,”

But Gibbs said: “You can cite this book and can find information in it to support your case for charter schools and vouchers.” Gibbs leads the effort Kochs Off Campus! — a nonpartisan group of Tucson residents, UA faculty, and students concerned about the undue influence of right-wing money on public education.

“David Garcia’s book School Choice betrays a strong bias against public schools and in favor of privatization. While he does acknowledge some criticisms of school vouchers, charter schools and the like, the overwhelming tone is one of support. The language is tendentious and revealing, with advocates of vouchers and charter schools characterized as “pro-choice” activists, which implicitly disparages advocates of public schools as anti-choice.”

“This is the language of right-wing advocacy more than scholarship. When Garcia discusses Arizona’s leading role in promoting charter schools, one senses a measure of personal pride in the narrative. Milton Friedman is quoted liberally, and with a generally positive tone. Overall, reading the book gives me a strong sense that the author is an advocate for privatized education. His views on education do not seem very different from those of Doug Ducey — or Charles Koch.”

Indeed, many Democrats consider Garcia a “Manchurian Candidate,” a person running for office who publicly supports one group to win an election, but who uses his executive or legislative powers to assist an opposing group.

For example, Garcia’s book offers legal tips for school voucher operatives to use. “ESA programs has been defended as constitutional even in states with Blaine amendments that prohibit direct government aid to religious educational institutions,” citing the court ruling in Niehaus v. Huppenthal, Maricopa County Superior Court of Arizona. 310 P.3d 983 (2013). 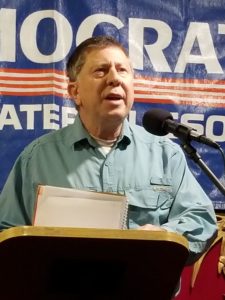 On page 80, Garcia adds a school-voucher strategy tip, “For this reason, I anticipate that ESA programs, rather than vouchers, will be expanded in the future. The legal precedent is set to allow policymakers seeking to provide students access to private religious schools through school choice policies to accomplish their goals through ESA programs.”

Garcia’s School Choice is a blueprint to dismantle public education in Arizona. Charter schools suck the lifeblood out of Arizona public schools, because 83 percent of funding for charter schools comes from the state, compared to only 44 percent for district public schools.

On April 6, 2017, Ducey signed into law Senate Bill 1431, allowing parents to use prepaid bank cards to pay for education-related tuition and fees, textbooks, and curriculum for religious and for-profit private schools. This met an immediate negative response from the public. Parents, students and teachers in the statewide Save Our Schools movement have put a public initiative on the ballot (Proposition 305) to overturn’s Gov. Ducey’s “ESA” school voucher program. 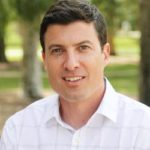 A textbook for a right-wing class on education

“Arizona parents are regarded as consumers and encouraged to vote with their feet by exiting traditional public schools in favor of charter schools,” Garcia writes on page 37.

Garcia’s book is tailor-made for a Koch brothers course on public education. For example, Libertarian Assistant Professor Jonny Anomaly of the Koch Brothers’ “Freedom School” at the UA in Tucson describes education as a “good,” like a box of cereal, which students “consume.” Anomaly makes a bogus economic analysis of “markets for education,” as if education were a product to be bought and sold.

Gibbs says, “If you wanted to present a libertarian or right-wing course on education, you could use this textbook quite easily, because is so much information to support your case. You Can trot out that he’s a democrat and can’t be accused of only using Republican sources.”

In April 2018 UA professors and activists laid bare the Koch Brothers’ agenda to use Arizona’s universities to advance their anti-worker, anti-consumer and anti-public school agenda. At least 150 people attended “Dark Money, Charles Koch, and the UA Freedom Center” at the Tucson UA campus in April.

The speakers called on University to rigorously scrutinize the so-called “Freedom Center,” and called on Koch-funded Gov. Ducey to end the unique $2.5 million budget line-items especially for the Freedom Center.

“Arizona parents are regarded as consumers”

Garcia even says on page 46, “Finally, there are indications that students who participate in the Arizona ESA program were enrolled in school districts with higher percentages of white students and wealthier than the general student population.”

Friedman: No school if you can’t pay

Starting on page 15, Garcia’s book lays out the thinking of Milton Friedman, an economist who first proposed universal school vouchers in 1955.

Gibbs says: “The book ignores damning findings by author Nancy MacLean, which she found in his private communications in 1959. What Friedman said he would really like to do is privatize education completely so that people would have to pay for the full cost of education. If you can’t afford it you can’t go to school.”

“The book doesn’t mention that,” Gibbs said. MacLean is the author of the bestseller Democracy in Chains: The Deep History of the Radical Right’s Stealth Plan for America.

“There is a hidden agenda in Garcia’s book of a generalized removal of public engagement of public education, as shown in the private statements by Milton Friedman. The fact that Garcia doesn’t even discuss these things strikes me an error by omission.”

Garcia writes that “The core of Friedman’s universal voucher proposal is to improve the delivery of services through choice and competition,” on page 21.

“Vouchers changed the role of government from funding and providing  education to funding and approving educational providers,” Garcia writes on page 22. “In other words, state government would still fund education, but it was no longer the primary entity responsible for providing public education. Rather, this responsibility could be filled by many other institutions, organizations, or enterprises,” Garcia writes.

Gibbs says: “From standpoint of the Koch brothers, they want to make their agenda bipartisan so that whatever party wins, their agenda is still implemented. The effect of the book is to normalize and make sound reasonable the idea of vouchers and charter schools in the Democratic party. It’s not enough that we have the Republicans Party advocating for these things.”