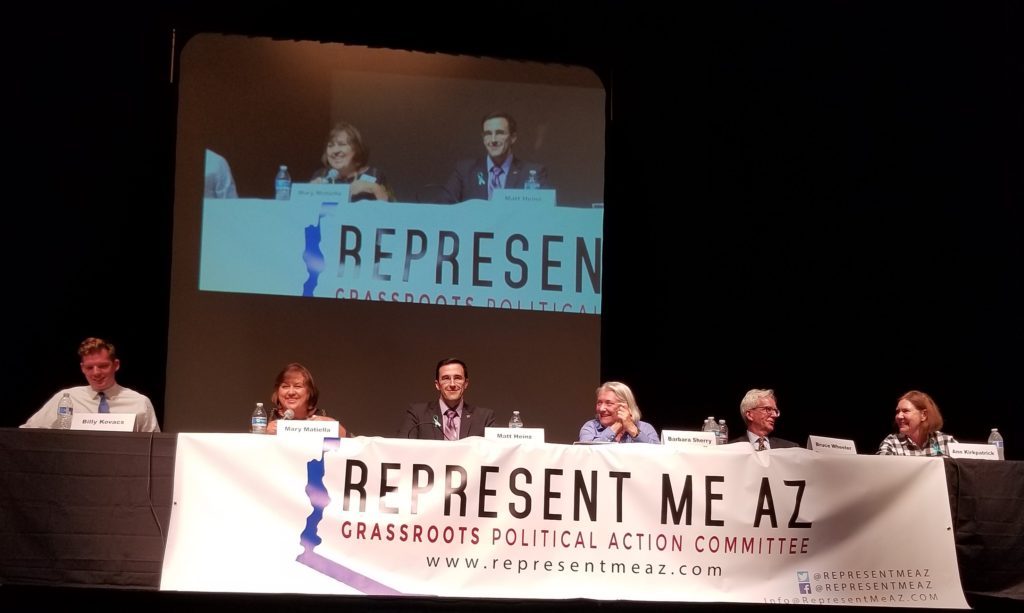 The CD2 Congressional candidate forum on July 19 was a classic Democratic assembly, with at least 450 attendees including hecklers, cheering and booing, and horrendous audio.

The PAC RepresentMeAZ organized the event at Tucson High School and gave out report cards about the candidates. The results will be posted soon on Facebook. At the last event, Bruce Wheeler was the crowd favorite, and I’m guessing this time it may be Billy Kovacs.

Sure enough, Billy Kovacs was the audience favorite at the July 19th candidate forum. Second place went to the winner of our last Forum, Bruce Wheeler.

Who can beat the Republican?

The unspoken issue is who can beat Republican Congressional favorite Lea Marquez-Peterson, who has amassed a war chest of $509,067 of cash on hand. Money matters in an election and Kirkpatrick has $836,927 in cash and Heinz has $493,797 in cash. Read Kirkpatrick & Heinz Lead in CD2 Congress Fundraising, Marquez-Peterson Catching Up. The GOP considers Kirkpatrick to be the front-runner.

But that didn’t matter to the partisan crowd at the candidate forum. Kovacs appeared to connect with the audience, drawing repeated applause, especially for opposing the militarization of the Mexico border.

“I don’t think we should increase the Border Patrol. If we want to stop the flow of migrants, we have to support South American countries, taking the diplomatic solution, and increasing foreign aid to those countries to stabilize those counties,” Kovacs said. “We shouldn’t send MS-13 gang members back into those countries because it destabilizes their countries.”

Kovacs called for campaign finance reform, saying, “If this is not changed in this country, a lot of these things will be pushed back. We need to make sure the representation comes back to the people and not to corporations. I signed a pledge from day 1 of my campaign that I will not take corporate money.”

Regarding mass incarceration, Kovacs said, “We need to get corporations out of the federal penal system. If we want to address economic inequality, we need to help the 230,000 people who are felons in Arizona and can’t get a job. We also need to address the bail system to make sure it is at a level where people can afford bail. It should be based on income.” He added a crowd-pleaser, “Republicans aren’t pro-life, they’re pro-birth. You can tie education outcomes to recidivism, that what mass incarceration does.”

Wheeler opposed the border wall, calling it, “an expensive, divisive, racist system that does not reflect the values of America. I grew up in South America, and I understand this from a personal point of view.”

He called for making healthcare affordable for all Americans. “We spend $3.2 trillion on healthcare —  the highest per capita of any nation on this globe. Yet 27 million Americans are uninsured. Corporations must pay their fair share. There should be a 6.2% income-based health care premium paid by employers.” Wheeler supports Medicare for All.

He favored strengthening the Dodd-Frank law and ending Trump’s tariffs. “We’ve seen Wall Street dominate the Republican party and make inroads into the Democratic party. That is why those Democrats voted to water down Dodd- Frank. In 7 years, Obama had economy turned around, and now a narcissist president is taking credit —  when he is the biggest threat to the economy, particularly with the tariff war that separates us from our allies and the second largest economy in the world — China. That will have a devastating consequences.”

“When the tax cut was passed in December by the Republicans, it added a $1.1 trillion deficit. They have a master plan — you know they’re coming after Medicare and Social Security — with cuts already in Medicare.”

He was the only candidate to mention climate change. “The existential thing in front of us now is climate warming, and the federal budget does not do anything for sustainability. It still has a $52 billion subsidy for fossil fuels, and that is an abomination that must be ended.”

He opposed mass incarceration. “We’re investing in prisons instead of education. Imagine a world that that is turned around.”

“The US has highest per capita and numerical total of incarceration in the world. This is a travesty that must be addressed. Republicans believe in draconian mandatory sentencing. As a result, Arizona has 62,000 Americans in prison. Since 1992, that is a 171% increase. We are the leader in the privatization of prisons. It’s an abomination that a prison would profit from incarceration. I have fought this in the legislature and will fight this in Congress. Arizona has a $1 billion corrections budget — 11% of the state budget. The state is spending over $50,000 per prison inmate, compared to $7,000 per pupil. It robs us of our youth, our beauty, and our values.”

Mary Matiella and Kovacs agreed on many points, such as opposing the militarization of the border and fighting income equality. She agreed with Wheeler on opposing mass incarceration. But she went a step further each time:

“Mass incarceration is a personal issue for me. I have had many close relatives that have gone to prison for almost nothing. The one word I didn’t hear, the real reason for mass incarceration, is racism. Brown people are in jail at much higher rates than others because they don’t have the money to defend themselves.”

“Another thing is that we need to decriminalize what put them into prison, we need to decriminalize marijuana.  It’s not as dangerous as alcohol, but it’s to put people of color into prison. Among African Americans, 1 in 3 is incarcerated in their lifetime. What is wrong with that picture? It’s poverty, it’s racism. We have to hold justice system accountable for that.”

“We have to train children in preschool, in neighborhoods, and in churches, to start telling people that just because a person is different, it doesn’t mean you have to fear them. We need to have social education where we become more mindful and train the population to be more mindful, and not to be afraid of people who look different and act different, because in their hearts, they are like us.”

“What hurts our economy is income inequality,” Matiella said. “Over last 40 years, wages have not kept up with inflation. The people hurt the most are the younger generation. They have college debt, they can’t afford to buy a house, and can’t buy a car. In order to reverse income equality, we need a minimum wage of $15. These folks have to pay rent, but they can’t even pay rent. Let’s give them a salary that’s aligned with their efforts. Right now, the profits are staying at the top. You have CEOs making 300 times the average employee. That is wrong.”

The audience booed Kirkpatrick for her apparent support of ICE, for her attack mailers and ads against Heinz, and she was heckled repeatedly. (Personally, I think hecklers should be ejected. There is no place for this abusive behavior in the Democratic party.)

Regarding the Mexico border, she said, “I’ll tell you what doesn’t work and that’s a wall. 30% of the economy in Southern Arizona comes from Mexico. We have to pass comprehensive immigration reform so that the Border Patrol can focus on criminal activity. I’m a former prosecutor and I have zero tolerance for drug cartels and criminals. I introduced legislation that would say if you’re hired and employed in this country, you have legal status and have a choice to get green card or citizenship.”

As for the unpopular Rosemont mine proposal, she said, “I took a public position opposing the Rosemont mine. I’m not closed to all mining. It’s appropriate in some places. I’ve long opposed uranium mining in Grand Canyon, and the current administration proposing it.”

She defended support of the Oak Flat land swap for the Resolution copper mine in 2016. “When (Senator John) McCain and (Republican Rep. Paul) Gosar were going to pass it, I inserted myself into plan to include environmental compliance before the land swap could take place. This took the sacred Apache site out of the legislation and said we must have consulations with the tribe to protect Oak Flat. The tribe wanted to continue to harvest acorns there and that was put in legislation. There is a lot of misunderstanding about that legislation. President Obama signed it because it had those protections in it. That area has richest copper deposit in the world, but I made sure it was mined while protecting the environment, protecting the people and keeping it sustainable. That’s in fact what happened.”

Kirkpatrick addressed her former support for the NRA, saying, “We have to stop the NRA. When Gabby (former Congress member Gabby Giffords) was shot and injury, and the judge (federal Judge John Roll) was killed, I re-evaluated my position and changed my mind and the way I vote. I supported legislation to increase background checks, to keep guns away from people on terror watch list, and supported legislation to kept guns away from domestic abusers.”

Heinz called for incremental steps towards Medicare for All, taking the profit motive out of healthcare, strengthening Dodd-Frank banking protections for consumers, opposing a balanced budget amendment, and opposing the NRA.

Sherry said she supported the Dodd-Frank law, taxing rich people more among other things. As before, she really didn’t express any coherent thoughts. For example, she said, “I’m the unknown candidate. I marched in anti-Vietnam War protests We’re headed into a dark place. We’ve got Kavanaugh waiting in the wings.”