President Obama is in Oklahoma today to give a speech outlining a new effort to reduce sentences for nonviolent offenders and to revamp prison life. Obama, in Oklahoma, Will Focus on Overhaul of Criminal Justice System.

While a number of former Confederate states have been taking down the flag of treason and racial oppression in recent weeks, apparently the Neo-Confederate dead-enders in Oklahoma have not been paying attention to the news.  Charles Pierce at Esquire writes, Oklahoma Protesters Welcome Obama with Confederate Flags:

One hates to pick on Oklahoma but, here at the Cafe, we are tough but we are fair. Sometimes, the most obvious customers get the fastest service.

Just for the historical record, mind you, we should note that Oklahoma did not become a state until 19-freaking-07, and therefore that it has but fk-all to do with the “heritage” of the Civil War. We should further note that, without the vigorous intervention of the United States of America, Abraham Lincoln presiding, there likely wouldn’t even be an Oklahoma, what with the transcontinental railroad and the ethnic urban-renewal practiced by the U.S. Army. Nonetheless, today’s events are not About Race because nothing ever is About Race. 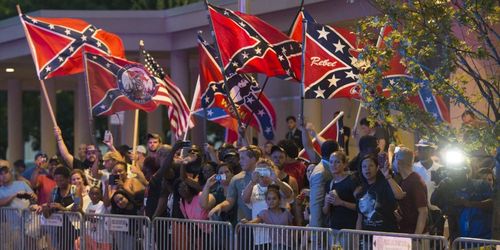 “We’re not gonna stand down from our heritage. You know, this flag’s not racist. And I know a lot of people think it is, but it’s really not,” one
protester who said he drove up from Texas, Trey Johnson, told the news station.

No kidding. Great visuals. Greet the first African American president with the Gonfalon of Loserdom everywhere he goes for the rest of his term. We might not have another Republican president until the 22nd century. I do so despair of the rebranding.​

Oklahoma, doing its part to take the media attention off the goobers in Texas As Jade Helm 15 Military Exercise Begins, Texans Keep Watch ‘Just in Case’.