The White House and Senate Judiciary Committee Chairman Sen. Chuck Grassley refused to request an FBI background check in light of the sexual assault allegations of Dr. Christine Blasey Ford against Judge Brett Kavanaugh. This is standard operating procedure for the committee but was refused in this instance, despite Dr. Blasey insisting on an FBI investigation before she presents her testimony.

Legal minds have asked “why refuse an FBI background investigation?” and “what is the rush to confirmation?” since there is no actual deadline, other than the GOP’s political calendar for the midterm election.

Now we know the answer to those questions: the GOP is engaged in a cover-up.

On Sunday night, the New Yorker’s Ronan Farrow and Jane Mayer published an article detailing a new allegation of sexual misconduct against Judge Brett M. Kavanaugh, the Republican Supreme Court nominee. Deborah Ramirez, a Yale classmate from Kavanaugh’s undergraduate years, described a drunken freshman-year dormitory party during which she claims he exposed himself and thrust his penis into her face, causing her to touch it accidentally as she pushed him away. None of it, she said, occurred with her consent.

In an op-ed at the Washington Post, Christine Emba describes what the GOP response was to this second credible accusation. The Republican Party has laid itself bare:

The article offers disturbing details about the alleged event at Yale, and about the alcohol-soaked backdrop of Ivy League and prep-school party culture when Kavanaugh was a student in the 1980s. But tucked into the New Yorker article is one particularly appalling revelation that speaks less to the character of the Supreme Court nominee himself than to that of the Republicans who continued to press his case:

The offices of at least four Democratic senators have received information about the allegation, and at least two have begun investigating it. Senior Republican staffers also learned of the allegation last week and, in conversations with The New Yorker, expressed concern about its potential impact on Kavanaugh’s nomination. Soon after, Senate Republicans issued renewed calls to accelerate the timing of a committee vote. [Emphasis mine.]

Ah. We had wondered what the hurry was, and now it all makes sense. It turns out that Graham and other in-the-know Republicans were likely in a rush because they were hoping to get out ahead of a second female accuser, to ram through a confirmation vote before any new potential roadblocks could be brought to light. It was “imperative.”

They “expressed concern” — not about the truth of the allegation, or the impact such an incident might have had on the accuser, or whether it sheds light on the existing allegations made by research psychologist Christine Blasey Ford. No, they were concerned about the potential impact on Kavanaugh’s nomination — and whether it would hamper their ability to install their favored candidate in a lifelong appointment, where his decisions could affect the lives of millions.

If you wondered whether senior Republicans wanted find out the truth about their nominee or the allegations levied against him — by Ford, by Ramirez or in any other case — you have your answer.

If you assumed that these Republicans cared about character, or that the concerns of women matter to them in any way, it’s time to revise that assumption.

If you held out hope that Kavanaugh’s advocates would set aside their partisan aims in favor of country, justice or even preserving the legitimacy of the nation’s highest court, it should be extinguished.

And if there were any doubt that Kavanaugh must withdraw from the nomination, it has been resolved.

The Republican Party, the party of privileged white male patriarchy, is utterly morally bankrupt and unfit to govern in a pluralistic democracy.

Ranking Democrat on the Senate Judiciary Committee Diane Feinstein has called for a delay in Kavanaugh nomination after new allegation.

The New Yorker’s Jane Mayer says that rumors of the alleged episode were so widespread that the New Yorker reached out to Ramirez—not the other way around.

“She didn’t come forward with it,” Mayer said Monday on NBC’s “Today.” “What happened was, the classmates at Yale were talking to each other about it, they were emailing about it. We’ve seen the emails, back in July before Christine Blasey Ford came forward, and eventually the word of it spread.”

“It spread to the Senate. It spread to the media,” she continued. “And [we] reached out to her. After giving it really careful consideration for six days, she decided to talk to [Ronan Farrow].”

Kavanaugh categorically denies the allegation and says that it is a “smear.” But if it never happened, why were his classmates at Yale talking about it even before there were any allegations of sexual misconduct made public? Seems that something did happen.

Joan McCarter at Daily Kos reports “To add to the mix, Stormy Daniels attorney Michael Avanatti tweeted Sunday night “I represent a woman with credible information regarding Judge Kavanaugh and Mark Judge.” That woman, he said in a follow-up tweet “is not Deborah Ramirez.” He says he and his client will “be demanding the opportunity to present testimony to the committee and will likewise be demanding that Judge and others be subpoenaed to testify. The nomination must be withdrawn.” 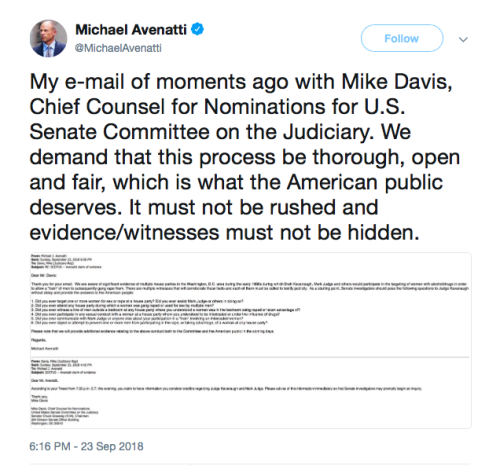 Why wouldn’t Sen. Grassley subpoena Mark Judge, the other man who Dr. Blasey said was in the room when she was assaulted by Kavanaugh, and who she says fell on top of them knocking them off the bed and allowing her to escape?The New Yorker’s Ronan Farrow and Jane Mayer article details new information:

Ford’s allegation has made Judge a potentially pivotal witness for Kavanaugh. Judge told The New Yorker that he had “no recollection” of such an incident. Judge, who is a conservative writer, later gave an interview to The Weekly Standard in which he called Ford’s allegation “just absolutely nuts,” adding, “I never saw Brett act that way.” Asked by the interviewer whether he could remember any “sort of rough-housing with a female student back in high school” that might have been “interpreted differently by parties involved,” Judge told the publication, “I can’t. I can recall a lot of rough-housing with guys.” He added, “I don’t remember any of that stuff going on with girls.”

After seeing Judge’s denial, Elizabeth Rasor, who met Judge at Catholic University and was in a relationship with him for about three years, said that she felt morally obligated to challenge his account that “ ‘no horseplay’ took place at Georgetown Prep with women.” Rasor stressed that “under normal circumstances, I wouldn’t reveal information that was told in confidence,” but, she said, “I can’t stand by and watch him lie.” In an interview with The New Yorker, she said, “Mark told me a very different story.” Rasor recalled that Judge had told her ashamedly of an incident that involved him and other boys taking turns having sex with a drunk woman. Rasor said that Judge seemed to regard it as fully consensual. She said that Judge did not name others involved in the incident, and she has no knowledge that Kavanaugh participated. But Rasor was disturbed by the story and noted that it undercut Judge’s protestations about the sexual innocence of Georgetown Prep. (Barbara Van Gelder, an attorney for Judge, said that he “categorically denies” the account related by Rasor. Van Gelder said that Judge had no further comment.)

Another woman who attended high school in the nineteen-eighties in Montgomery County, Maryland, where Georgetown Prep is located, also refuted Judge’s account of the social scene at the time, sending a letter to Ford’s lawyers saying that she had witnessed boys at parties that included Georgetown Prep students engaging in sexual misconduct. In an interview, the woman, who asked to have her name withheld for fear of political retribution, recalled that male students “would get a female student blind drunk” on what they called “jungle juice”—grain alcohol mixed with Hawaiian Punch—then try to take advantage of her. “It was disgusting,” she said. “They treated women like meat.”

Farrow and Meyer report that Senate Republicans have known some details of these incidents for days. Their response was to attempt to accelerate the committee vote and seat Kavanaugh before reporters could complete their fact-checks and the stories broke.

There are two scandals here. First, a federal judge who has escaped accountability for alleged past acts of sexual misconduct, because it was never fully investigated in past confirmation hearings, nor this confirmation process.

Second, and more broadly, the White House and Republican leadership have actively blocked an FBI background investigation, despite having received troubling new information of sexual misconduct by Brett Kavanaugh, and tried to cover it up and rush to a confirmation vote before the allegations became public.

The only appropriate legal response now is to suspend this nomination for a full FBI background investigation to determine the facts and to interview any corroborative or exculpatory witnesses. Contact your senators today!