The traditional Independence Day speech that American presidents give is based upon our national motto: E Pluribus Unum, Latin for “Out of many, one.” It is a day we traditionally celebrate immigrants being sworn in as new American citizens and becoming part of the great American melting pot (Schoolhouse Rock version). We celebrate what makes us unique as a nation in the history of the world: we are not defined by a single race, religion, language or ethnicity, but by our commitment to an ideal, found in the Declaration of Independence:

We hold these truths to be self-evident, that all men are created equal, that they are endowed by their Creator with certain unalienable Rights, that among these are Life, Liberty and the pursuit of Happiness.–That to secure these rights, Governments are instituted among Men, deriving their just powers from the consent of the governed…

But this is not the speech that Donald Trump delivered last night under the gaze of four American presidents at Mount Rushmore, oh no. Donald Trump gave a speech that Jefferson Davis himself would have given in defense of the Confederate States of America and white supremacy in defense of slavery. It was all about white grievance and racial division and hatred. Donald Trump doesn’t want to take us back to 1954 before Brown v. Board of Education struck down the Jim Crow lie of “separate but equal.” He wants to take us all the way back to 1854, before Abraham Lincoln and abolitionists formed the Republican Party to end slavery.

On a very different Fourth of July holiday, when many Americans are wrestling with the racist misdeeds of the country’s heroes and confronting an unrelenting pandemic with surging cases, their commander-in-chief is attempting to drag America backward — stirring fear of cultural change while flouting the most basic scientific evidence about disease transmission. 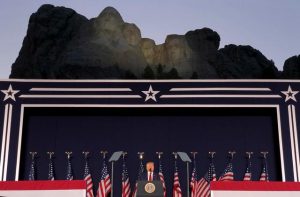 In a jaw-dropping speech that amounted to culture war bonfire, President Donald Trump used the backdrop of Mount Rushmore Friday night to frame protesters as a nefarious left-wing mob that intends to “end America.” Those opponents, he argued, are engaged in a “merciless campaign to wipe out our [Confederate] history, defame our heroes, erase our values, and indoctrinate our children.”

[W]hen Trump spoke on Friday night of a “growing danger,” he was talking about an entirely different threat than rising coronavirus cases. He referred to a threat to America’s [Southern] “heritage” — rhetoric intended to rev up his base at a time when many Americans are attempting to relearn the nation’s history with greater attention to the wrongs inflicted on Black and Native American people.

Repeatedly using vague pronouns like “they” and “them,” Trump sought to play on the fears of a minority — that appears to be shrinking, according to polls — who view the rise of Black Lives Matter as a threat to the historical dominance of White people. He described the goals of protesters who are attempting to right the wrongs of history as “alien to our culture, and to our values.”

One of “their political weapons,” he said, is “cancel culture,” which would drive people from their jobs, shame dissenters and “demand total submission” from anyone who disagrees.

“We will expose this dangerous movement, protect our nation’s children, end this radical assault and preserve our beloved American way of life,” Trump said. He mysteriously described those who would tear down [Confederate] statues of racist leaders from the past as “a new far left fascism that demands absolute allegiance.”

“If you do not speak its language, perform its rituals, recite its mantras and follow its commandments, then you will be censored, banished, blacklisted, persecuted and punished,” Trump said. “It’s not gonna happen to us,” he said to cheers, as he revived his familiar “us versus them” language. “Make no mistake. This left-wing cultural revolution is designed to overthrow the [Confederate sedition and rebellion].”

“To make this possible, they are determined to tear down every [Confederate] statue, symbol and memory of our  [Southern] heritage,” he said.

Dr. Strangelove fans will recognize this unhinged rant as Commander Jack D. Ripper: “I can no longer sit back and allow Communist infiltration, Communist indoctrination, Communist subversion, and the international Communist conspiracy to sap and impurify all of our precious bodily fluids.” This is when Group Captain Lionel Mandrake realizes that Ripper has gone insane.

On Wednesday, Trump called the words Black Lives Matter a “symbol of hate” in response to New York City’s plan to paint “Black Lives Matter” on Fifth Avenue in front of Trump Tower. Trump: Painting ‘Black Lives Matter’ On 5th Avenue Would Be ‘Symbol Of Hate’. Trump has also threatened to veto a must-pass defense policy bill because it includes an amendment that calls for the removal of the names of Confederate traitors from all military assets within three years.

Trump has doubled down on those race-baiting tactics even as he has fallen far behind his opponent, former Vice President Joe Biden, in the polls and a majority of Americans across racial and ethnic groups are expressing support for the Black Lives Matter movement, according to recent polling by the Pew Research Center.

Colbert King of the Washington Post in a moving opinion writes, Our declaration this Independence Day should be liberation from Trump:

“This Fourth of July is yours, not mine. You may rejoice, I must mourn.”

Frederick Douglass’s historic oration and cry of pain, anger and resolve were delivered to the Rochester Ladies’ Anti-Slavery Society’s Fourth of July observance in Rochester, N.Y., in 1852.

Douglass did not use the occasion to take anything away from the Founders and their legacy. “I cannot contemplate their great deeds with less than admiration,” he told the crowd of more than 500 abolitionists. “They were statesmen, patriots and heroes, and for the good they did, and the principles they contended for, I will unite with you to honor their memory.”

But Douglass knew he was commemorating the signing of the Declaration at the very hour millions of black men, women and children in America were chained to servitude. “The rich inheritance of justice, liberty, prosperity and independence, bequeathed by your fathers,” Douglass said to his largely white audience, “is shared by you, not by me.”

What is this Fourth of July to America?

This day in national life, I submit, is President Trump’s. It has been appropriated by his shameless narcissism.

Trump will celebrate the Fourth by drawing attention to himself in the White House, backdropped by a huge fireworks display on the Mall and flyovers by the Navy’s Blue Angels and the Air Force’s Thunderbirds.

Unlike Trump, many others will use this Fourth to give thoughts and prayers for the 126,000 people in the country who have died since the start of the novel coronavirus pandemic, and the 2.7 million more sickened by the disease.

This July 4 is not a high old time in America.

The nation is spending this national holiday in the midst of a deadly public health crisis that Trump, through negligence, incompetence and disgraceful self-regard, allowed to spread like a wildfire across the country.

All that is of small moment to Trump.

This president will celebrate and sermonize the day, looking past the protests against shocking and bloody police practices and the gross economic injustices that he has allowed to flourish on his watch. Trump shout-outs to liberty and equality will ring hollow.

Yes, the Fourth of July is a date to honor. But this year, it is also a day of sorrow for where we now find ourselves.

The United States of America, created in 1776 by men who put love of country over their own private interests — who staked their lives, fortunes and their sacred honor on the cause of their new nation — is now in the grasp of a man whose entire life has been spent taking, while giving nothing in return.

Trump’s successes are displayed in shrines across the country and around the world emblazoned with his name — Trump towers, Trump plazas, Trump golf courses, Trump casinos, and Trump streets and roads. Trump’s love is limited to his private interests. He stakes his life and fortune only on the cause of Trump.

To further sully the celebration of the most pivotal day in U.S. history, the White House is in the grasp of a president who thinks the United States’ heritage is exemplified by the legacy of the Confederate flag and the traitorous generals who fought under that symbol of white supremacy.

Trump’s meltdown over the attempted takedown of the slaveholding Andrew Jackson’s statue in Lafayette Square is, for instance, of a kind with his cherishing of monuments of the War of Southern Aggression, which started when the Confederacy fired on the American flag at Fort Sumter.

Douglass would be revolted by Trump’s infatuation with a history in which generations of blacks were robbed of their liberty and forced to show obedience to the master. As outraged as I am now.

Trump’s warm embrace of white nationalism on Independence Day 2020 makes a mockery of the concepts of justice and liberty entrusted to the nation in the Declaration.

Gwen and I celebrated our 59th wedding anniversary on July 3. The first four Fourth of Julys of our marriage were spent as citizens of a country with a large swath of areas that had hotels, restaurants and places of entertainment that we were not allowed to enter because we were black. Two of those years I spent proudly wearing the uniform of a U.S. Army commissioned officer.

Try living with that.

Today, we have the bodies of George Floyd, Rayshard Brooks, Breonna Taylor and Ahmaud Arbery — with a preening, coldblooded bully ensconced in the Oval Office.

Whose Fourth of July is this?

The Founders discovered themselves faced with an oppressive Crown.

Separation from the Crown was right.

So, too, will be America’s liberation from Donald Trump.

That should be our declaration on this Independence Day.