In his State of the Union Address on Tuesday night, President Obama Will Seek to Raise Taxes on Wealthy to Finance Cuts for Middle Class: 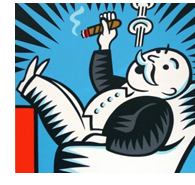 President Obama will use his State of the Union address to call on Congress to raise taxes and fees on the wealthiest taxpayers and the largest financial firms to finance an array of tax cuts for the middle class, pressing to reshape the tax code to help working families, administration officials said on Saturday.

The president’s plan would raise $320 billion over the next decade, while adding new provisions cutting taxes by $175 billion over the same period. The revenue generated would also cover an initiative Mr. Obama announced this month, offering some students two years of tuition-free community college, which the White House has said would cost $60 billion over 10 years.

The centerpiece of the plan, described by administration officials on the condition of anonymity ahead of the president’s speech, would eliminate what Mr. Obama’s advisers call the “trust-fund loophole,” a provision governing inherited assets that shields hundreds of billions of dollars from taxation each year. The plan would also increase the top capital-gains tax rate, to 28 percent from 23.8 percent, for couples with incomes above $500,000 annually.

Those changes and a new fee on banks with assets over $50 billion would be used to finance a set of tax breaks for middle-income earners, including a $500 credit for families in which both spouses work; increased child care and education credits; and incentives to save for retirement.

The proposal includes some elements that have previously drawn support from both Republicans and Democrats, including education and retirement savings proposals and the secondary earner credit. A tax on large banks was part of a plan proposed last year by former Representative Dave Camp, a Republican from Michigan who retired as chairman of the Ways and Means Committee.

Mr. Obama’s advisers characterized the plan as the next phase in the president’s economic message, which he has been promoting over the past two weeks with trips highlighting the nation’s financial rebound. During the tour, Mr. Obama has pitched a range of initiatives to help the middle class, including free community college and paid leave. The bulk of the financing for the plan — $210 billion — would come from a capital-gains tax hike and a change in the way the tax code treats the appreciated value of inherited assets. Under the proposal, inherited assets would be taxed according to their value when they were purchased. That means the capital gains on those assets during a person’s lifetime, now shielded from taxation, would be subject to tax at the time of the bequest.

The proposal, which does not apply to charitable gifts, would fall almost entirely on the top 1 percent of taxpayers, administration officials said. It would apply to capital gains of $200,000 or more per couple, with an additional $500,000 exemption for personal residences.

The remaining $110 billion to pay for Mr. Obama’s new tax proposals would be generated by a fee imposed on the largest and most highly leveraged financial firms. That proposal, administration officials said, was designed to make “risky activity” more costly for the roughly 100 such companies in the nation with assets more than $50 billion. Those companies would be assessed a fee based on the amount of debt they hold.

Mr. Obama also wants to triple the child care tax credit, now an average of $550, and make it easier for middle-income earners to qualify, offering up to $3,000 for each child under age 5. White House officials said the plan would eliminate existing tax-advantaged flexible spending accounts for child care and reinvest those resources in the tax credit.

In addition, the president is proposing to streamline a jumble of educational tax credits and give students up to $2,500 annually toward earning a college degree. Students who attend school less than half the time would also qualify for the first time, and more of the credit, $1,500, would be available regardless of whether an individual owed any taxes.

The president’s proposal would also increase access to tax-advantaged retirement savings plans by requiring most employers that do not offer such plans to automatically enroll their workers in an IRA.

David Leonhardt at the New York Times’ Upshot explains what is Driving the Obama Tax Plan: The Great Wage Slowdown:

The key to understanding President Obama’s new plan to cut taxes for the middle class is the great wage slowdown of the 21st century.

Wages and incomes for most Americans have now been stagnant for 15 years. They rose at a mediocre pace for much of President Bush’s tenure in the 2000s, before falling sharply during the financial crisis that dominated the end of his presidency. Mr. Obama helped break the back of the crisis, but the recovery on his watch has been decidedly mediocre, too — especially in terms of paychecks.

Even as job growth has picked up in recent months, wages haven’t grown much more quickly than inflation. As a result, the government’s official statistics suggest that the typical American household makes no more than the typical household did in the final years of the 20th century.

That’s remarkable. There is little modern precedent for a period of income stagnation lasting as long as this one. Official records don’t exist before World War II. But the best estimate is that the Great Depression may be the only other modern time in which incomes for most households in the United States have grown so slowly — or not at all — for so long.

The great wage slowdown has several main causes: globalization, which has forced Americans to compete with hundreds of millions of poorer workers from around the world; technological change, which allows machines to replace human labor in new ways; the slowdown in American educational attainment, even as the rest of the world has continued to become more educated and more highly skilled; and the shifting balance of economic power, away from workers and toward companies and their executives.

The wage slowdown is the dominant force in American politics and will continue to be as long as it exists. Nothing drives the national mood — and, by extension, national politics — the way that the country’s economic mood does, as political scientists have demonstrated. And nothing drives the economic mood as much as wages and incomes, which are the main determinant of material living standards for most households. 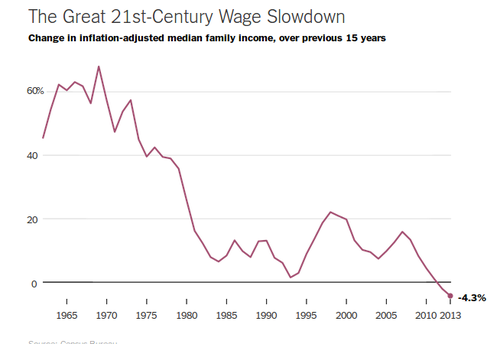 No politician, of either party, can quickly alter the basic forces behind the great wage slowdown. That’s why Mr. Obama has begun talking about a tax cut for the middle class, to be financed by a tax increase on the affluent — who have continued to do quite well in recent years. It’s also why several conservatives are talking about a cut in the payroll tax, the largest federal tax for most Americans.

About the only thing that can trump the impact of wage growth on the economy is fear of terrorism.

Tax cuts are hardly the only response to the great wage slowdown. Education can play a big role, as can workers’ bargaining power and family structure, among other issues. But tax policy can change more quickly than any other areas — and the federal government clearly controls tax policy in a way it doesn’t control some other areas.

The events of the last few months have made clear that the wage slowdown has become the central force driving American politics. It will continue to be until living standards begin rising at a healthy pace for Americans.