I am so sick and tired of all the Republican caterwauling about how “Democrats are going to pack the Supreme Court,” and demanding to know what Joe Biden will do after the Republicans complete their theft of yet another Supreme Court seat.

Republicans have spent years engaged in the most sophisticated court packing scheme in U.S. history, stealing not only one but two Supreme Court seats. What Republicans are really saying is that the federal courts are theirs for the packing with ideological extremists as they see fit, and no one will be allowed to “unpack” the federal courts of their evil handiwork by restoring some semblance of judicial balance to the courts.

As I have explained before in Not ‘Court Packing,’ But Long Overdue Court Reform:

You would have had to be living in a cave for the past twelve years to believe [Mitch McConnell’s] load of crap. For eight years of the Obama administration, Mitch McConnell abused the filibuster at an historic rate pursuing his politics of total obstruction to block Obama’s agenda. McConnell also imposed a judicial blockade on Obama’s nominations to court vacancies, which at one point was so bad that there was a crisis in the federal courts as a backlog of cases built up because there were not enough judges to hear the cases. And McConnell topped it all off by blocking Obama’s nomination of Merrick Garland to the Supreme Court, refusing to even extend him the courtesy of a meeting let alone a confirmation hearing. McConnell effectively took it upon himself to reduce the size of the Supreme Court to eight justices for over a year while he plotted to unconstitutionally steal a Supreme Court seat. 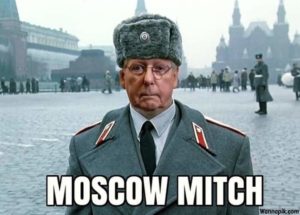 After “Moscow Mitch” helped the Russians help Donald Trump get elected in 2016, Mitch McConnell should explain why he obscured Russian interference in our election, he turned his attention to filling all of those judicial vacancies he created during the Obama years with his obstructionist tactics. He immediately cashed in his “stolen seat” on the Supreme Court with Neil Gorsuch, and over the past four years McConnell has managed to fill every vacancy in the federal bench with ideological conservatives, many of whom did not meet the ABA’s approval as “qualified” and lacked experience, but met the ideological test of the Federalist Society and the Heritage Foundation.

Mitch McConnell is the single biggest “court packer” in American history. And let’s not forget that McConnell triggered the rules change, clearing the way for Neil Gorsuch to be confirmed with a simple majority vote. It was McConnell who invoked the nuclear option for Supreme Court nominees in order to get his way.

No senator has ever engaged in an abuse of power in the Senate on the scale and scope of Mitch McConnell. So spare me your crocodile tears, Mitch, about Democrats vowing not to fight by the Queensbury Rules if they take control of the Senate, when you have cast aside the rules for so long, to the great detriment of this country. It’s payback time!

I agree with Sean Wright at Daily Kos:

Next time someone asks Biden or Harris if they are going to “pack” the courts they need to say: “No. Packing the courts is what Mitch McConnell has been engaged in for the past  twelve years, much to the detriment of the credibility of our court system and the principle of equal justice under the law. What we are going to be looking at in our administration is unpacking the courts. Decreasing the influence of justices who were appointed based upon their commitment to party and ideology over the rule of law. And, if it takes restructuring our court system in order to achieve that goal, we will give that serious consideration.

This is the correct answer.

Ruth Marcus of the Washington Post writes, Republicans have no standing to complain about court-packing:

The most corrupt and criminal presidency in U.S. history.

No wonder Republicans are so desperate to change the subject.

The future of the court, now that Republicans are poised to cement a six-justice conservative majority, is a hugely important topic. Republicans stole one seat when they refused to let President Barack Obama fill a vacancy created nine months before the 2016 election. Now they are poised to steal another, rushing through President Trump’s nominee with Election Day less than a month away.

If Democrats, in response, are entertaining the “radical” idea of expanding the size of the court, it’s hard to blame them; Republicans have stocked the court with one and soon two justices whose seats they were not entitled to fill. This is slow-motion court-packing in plain sight.

Pressing Biden on this issue is entirely legitimate. “You’ll know my opinion on court-packing when the election is over,” as he said Thursday, is not an acceptable answer. It’s more than fair to ding Biden for this evasiveness, even if it’s understandable why he would want to.

Sorry Ruth, but no, it is not legitimate. This is a distraction that places an emphasis on the wrong issue. As you noted above, Republicans have been engaged in “slow-motion court packing in plain sight” and have “stolen two seats they were not entitled to fill.” This is the only issue, and where public outrage should rightly be focused. People should be demanding answers from these corrupt Republicans.

Answering is lose-lose for Biden. Saying yes to expanding the court would give Republicans ammunition they sorely need. Saying no would inflame the Democratic base, although it likely better reflects Biden’s instincts. Last year, he disclaimed any interest in such a change. “No, I’m not prepared to go on and try to pack the court, because we’ll live to rue that day,” he said.

Now, with Republicans rushing through a replacement for the late Ruth Bader Ginsburg, dodging the court-packing question may be the smartest approach.

Especially since the chances of it actually happening are low. Democrats would have to win the Senate majority, convince enough members to eliminate the 60-vote filibuster threshold for passing legislation, then come up with at least 50 votes (plus a Democratic vice president) to expand the size of the court. That’s not going to be an easy task.

In any event, Trump and his fellow Republicans have no standing — zero — to complain about this prospect. The hypocrisy would be laughable if it weren’t so breathtaking. Their unprecedented abuse of raw power brought us to this point. If they weren’t ramming through the Amy Coney Barrett nomination even as votes in the general election are already being cast, the notion of court-packing would not be seriously on the table.

Spare me the pieties about the sanctity of the Constitution, which, by the way, says nothing about the size of the court. “If you cherish the Supreme Court and the separation of powers, you need to reject the Biden-Harris ticket come November 3rd, and we’ll keep the nine-seat Supreme Court,” Vice President Pence said at the debate with Sen. Kamala D. Harris (D-Calif.) on Wednesday night.

A president who disdains rulings by “Obama judges” and calls on his attorney general to prosecute his predecessor and his current opponent does not get to talk about separation of powers or cherishing the court.

A presidential ticket that cannot bring itself to answer the simple question of whether it would respect the election results and engage in a peaceful transfer of power does not get to accuse the other side of seeking to undermine the rule of law. “The American people deserve a straight answer,” Pence lectured Harris. Okay, how about after a straight answer on the election?

And a party that has repeatedly demonstrated its willingness to exercise maximum political muscle doesn’t have much credibility when it warns that the other side might — might — do the same if it wins the presidency and the Senate majority. Republicans’ anticipatory lamentations over the potential demise of the filibuster ring awfully hollow.

Yes, it was a Democrat, then-Majority Leader Harry M. Reid of Nevada, who first exercised the nuclear option to eliminate the filibuster for lower court judges [to end McConnell’s judicial blockade during a judicial crisis], a lamentable move. But this approach was first raised by Republicans, and they had been poised to deploy it. Republicans did not hesitate to do away with the filibuster for Supreme Court justices when it was necessary to confirm Justice Neil M. Gorsuch.

If Democrats retake the Senate majority and consider doing away with the filibuster for legislation — well, I’ve been reluctant to endorse that step in the past, but you know who hasn’t? The president.

“The very outdated filibuster rule must go,” he tweeted in July 2017, as the Senate talked about repealing the Affordable Care Act. Again, in December 2018, frustrated over being unable to secure funding for his border wall, Trump tweeted at Majority Leader Mitch McConnell, “Mitch, use the Nuclear Option and get it done!”

Now, all of a sudden, the notion of doing away with the filibuster is somehow extreme. “They are going to end the filibuster and they’re going to do things that you wouldn’t have thought,” Trump warned of Democrats in an interview Thursday night with Fox News’s Sean Hannity.

Court-packing is a red herring. Trump is a clear and present danger.

And so are his Republican accomplices who have aided and abetter the most corrupt and criminal presidency in U.S. history. They all need to be defeated.