The Republican Party has long engaged in questionable direct mail to voters. In recent election cycles, it has been Arizona GOP Sends Out ‘Report Card’ Showing People Which Neighbors Voted in Recent Elections:

The so-called “voter report card” shows whether recipients and their neighbors have voted in the last few elections, warning a follow-up may be issued after the Nov. 8 presidential election. More than 10,000 fliers were sent out by the Arizona Republican Party.

(The Arizona Democratic Party has also sent out a similar flyer, comparing neighbors’ voting records, but its flyer doesn’t list anyone by name.)

National Census Day is coming up on April 1, and the Republican Party has been caught sending direct mail to voters that mimics the official Census form, which could cause confusion and non-responses to the actual Census, and raises legal questions.

The La Times reports, GOP is accused of sending misleading ‘census’ forms ahead of the actual count:

The Republican National Committee is sending documents labeled “2020 Congressional District Census” to people in California and across the country just weeks before the start of the official nationwide count of the country’s population.

Critics say the misleading mailers — in envelopes labeled “Do Not Destroy. Official Document” and including a lengthy questionnaire on blue-tinted paper similar to the type used by the real census — are designed to confuse people and possibly lower the response rate when the count begins in mid-March. 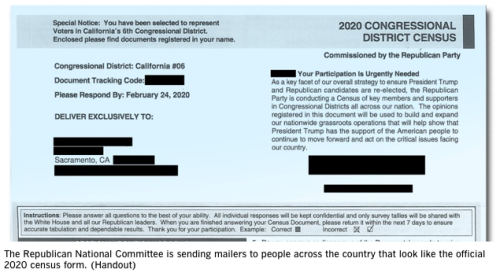 The top of the mailer states it is “commissioned by the Republican Party.” In smaller print on the second page, below a request for donations, is a notice that it is paid for by the Republican National Committee. Included in the envelope is a four-page letter from National Committee Chairwoman Ronna McDaniel asking for donations to the party and a promise to support Trump in 2020.

Unlike the official census form, the RNC survey is largely made up of political questions, such as whether the respondent supports using military force against Iran, thinks race relations in the country are getting worse and believes “political correctness” has gotten out of hand.

President Trump’s reelection campaign has followed up with text messages to some recipients, urging them to fill out the survey online.

With billions of dollars in federal funding on the line and a chance that California could lose a seat in Congress based on the census results, critics worry some residents will fill out the mock census document and ignore or throw away the real one.

Daniel Wessel, a spokesman for the Democratic National Committee, called the RNC mailer “intentionally deceptive” and “reprehensible.” Democrats also use surveys [I received one recently], but he said they do not attempt to disguise them as official government documents.

The Republican National Committee referred questions about the mailer to the Trump reelection campaign.

Trump campaign spokeswoman Samantha Zager noted that the documents are marked as coming from the Republican National Committee. She would not discuss other details, including how many mailers were sent, where they were sent and why the committee called it a “census.”

It’s not the first time that the Trump administration has been accused of trying to suppress census response rates. The Supreme Court last year blocked the Commerce Department from adding a citizenship question to the census, which experts said would have likely led to an undercount in states such as California that have large immigrant populations.

Immigrant activist groups and politicians remain concerned that even the administration’s attempt to include the citizenship question will drive down response rates. The Census Bureau has spent millions on ads in an attempt to assure people that their responses won’t be shared with other federal or local agencies.

Rep. Katie Porter (D-Irvine) said many of the people who have contacted her office said they first heard about the mailer from their confused elderly parents who were unsure if the document was the official census. Similar stories are popping up across the country, with particular concern for residents who don’t speak English fluently or who are unfamiliar with government documents.

Porter said she feared people would “toss their actual census envelope because they’ve already filled this one out.”

“We want everyone to be responding to the actual 2020 census,” Porter said. “There is a real risk of harm here.”

At a recent House Oversight Committee hearing, Census Director Steven Dillingham told lawmakers that he was generally aware of such misleading mailers, but had not seen one.

After being shown a copy of the RNC mailing, he said: “Our primary response is to make sure people get accurate information that this is not part of the Census Bureau’s questionnaire. When I read this, I would hope that anyone would realize that this is not the census.”

The RNC sent similar mailers ahead of the 2010 census. After that, Congress passed the Prevent Deceptive Census Look Alike Mailings Act, sponsored by Rep. Carolyn B. Maloney (D-N.Y.). The law bars non-government groups from sending solicitations with the word “census” on the envelope through U.S. mail.

The most recent RNC mailer does not use the word census on the envelope, though it is used repeatedly on the mailer itself. Maloney and other lawmakers have said they might need to revisit her legislation.

The official 2020 census begins in mid-March and responses can be submitted through the mail or online. The government asks for biographical information, including who lives in the home, their age and race. It does not ask questions about politics or ask for money.

Many states, including California, are spending millions of dollars to ensure an accurate count in the decennial census, the results of which are used over the next 10 years to determine how many representatives a state gets in Congress and how much money states and cities receive. Local governments use the data to decide where schools and fire stations should be built. Businesses use it to decide where to build and expand. Nonprofits use it to determine where to focus their resources.

“Anything that confuses people, that makes them think they’ve actually filled out the census, could cause them not to fill out the official census when it comes,” Rep. Jimmy Gomez (D-Los Angeles) said. “It’s something that could undermine the count.”

If you have received one of these RNC “2020 Congressional District Census” forms, I would encourage you to contact the Arizona Democratic Party to let them know about it, at (602) 298-4200. The party needs to make an issue of this to inform the public ahead of the Census to encourage an accurate head count.