The GQP’s Queen of voter suppression, Michelle Ugenti-Rita (R-Scottsdale) saw her bill to remove the “permanent” from the  Permanent Early Voting List (PEVL) – created several years ago when Republicans still held a decisive advantage in early voting, since equaled and surpassed by the Democratic Party – go down to defeat with a tie vote when one of the GQP elephants “went rogue,” Paul Boyer (R-Glendale), for the second time since last week.

A lone Republican joined with Democrats in the state Senate on Tuesday to block a bill that would have removed voters from the permanent early voting list who do not vote early in four consecutive primary and general elections.

With Sen. Paul Boyer, R-Glendale, siding with Democrats, the Senate blocked the bill by a vote of 15-15.

The GQP Queen of voter suppression, in a snit, retaliated against the rogue elephant, Paul Boyer.

In turn, the bill’s sponsor immediately moved to stop one of Boyer’s bills. In an unexpected and dramatic moment of parliamentary intrigue, the Senate voted 20-10 to recall his legislation expanding Arizona’s school voucher program, which it had passed the day before.

I’m sorry? I’ve been in this business for almost forty years, and I have never heard of a bill being “recalled,” except in the extremely rare circumstance when a technical amendment must be voted on to correct an error in the bill being transmitted to the other chamber. There is no provision for recalling a bill for the purpose of retaliation.

Nevertheless, I’ll take it. Boyer’s voucher vulture bill to expand school vouchers now cannot be acted upon by the House. It may only be a temporary reprieve, but celebrate small victories where you can. This was a two-fer on Tuesday.

The episode highlighted for a second time on the Senate floor the tensions within a Republican caucus that has the slimmest of majorities after losing a seat in the last election, thinning its ranks to 16 members in a 30-member chamber. 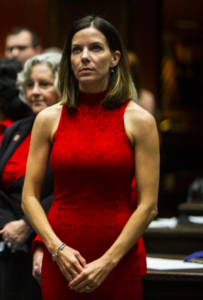 Sen. Michelle Ugenti-Rita’s Senate Bill 1069 (as amended) would have ended the permanent early voting list as it is known today, removing the word “permanent” from its name and labeling it simply the early voting list, or EVL.

Under the bill, county election officials would remove a voter from the list if the voter does not vote by early ballot in both the primary election and the general election for two consecutive elections.

Counties would have to notify voters first.

Ugenti-Rita has argued this merely would help ensure the list is accurate and up to date. Riiight.

Currently, voters are only removed from the list if their registration is canceled or moved to inactive status, a notice sent to their residence is returned undeliverable or when they ask to be removed.

Democrats have maintained that the measure would purge hundreds of thousands of voters from the permanent early voting list, confusing many who thought they were on it and ultimately diminishing turnout, i.e., voter suppression.

The PEVL, as it is known, has proven popular since legislators created it in 2007. About 3.2 million Arizona voters were on the permanent list as of Jan. 5. 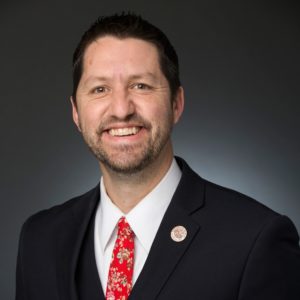 Boyer did not explain why he voted against the measure, and there was no debate on the bill on the Senate floor.

After her bill’s defeat, Ugenti-Rita quickly moved to recall Boyer’s Senate Bill 1452, which the chamber had approved along party lines Monday and sent to the House of Representatives.

Ugenti-Rita’s move sent lawmakers scrambling as Republicans who supported the voucher expansion seemed unsure of whether to bring back the bill for another vote. And Ugenti-Rita did not explain why she wanted the bill to be reconsidered the day after she had voted for it.

Retaliation … they all understood her her motivation.

“Sometimes I feel like I have returned back to high school,” she said.

See … even the QAnon Queen gets it.

Some Democrats, who had argued against Boyer’s bill, seemed to hesitate about whether to go along with Ugenti-Rita before joining in.

Did someone have to explain to them that it meant the House could not act upon the bill? They figured it out in the end.

Only 10 senators, all Republicans, voted against the motion.

With the bill already in the House, however, that chamber would have to vote on acceding to the Senate’s request to have the bill back.

Like I said, there is no provision for recalling a bill for the purpose of retaliation.

Boyer had angered members of his caucus by joining with Democrats to block a resolution last week holding the Maricopa County Board of Supervisors in contempt amid an ongoing dispute over lawmakers’ insistence on conducting their own audit of the county’s election.

Just a day after passing a massive school voucher expansion plan, the Senate on Tuesday decided to reconsider the bill.

This, after telling us on Monday how desperately Arizona’s poor children need this bill in order to escape their failing schools.

Now it seems the poor kids don’t need an escape plan nearly as much as Senate Republicans need to send one of their own to the woodshed.

The Senate voted to recall the voucher bill, SB 1452, from the House for a revote because Sen. Michelle Ugenti-Rita, R-Scottsdale, is steamed that the bill’s sponsor, Sen. Paul Boyer, R-Glendale, voted to kill her bill aimed at throwing a few hundred thousand voters off the Permanent Early Voting List.

Boyer on Tuesday joined with Democrats for a 15-15 tie and her bill died.

What’s that old saying about payback?

Boyer was the renegade and must pay

Ugenti-Rita immediately asked for a reconsideration of Boyer’s voucher bill. Democrats were happy to oblige and a few Republicans went along, happy for the chance to stick it to Boyer. It’ll be up to the House now to decide whether to agree to the Senate’s recall of the bill.

In addition to killing Ugenti-Rita’s plan to make it difficult for all but the most dedicated party voters to automatically get an early ballot, Boyer is the Republican renegade who last week voted with Democrats not to hold the Maricopa County Board of Supervisors in contempt for refusing to turn over ballots and the machinery for yet another election audit.

I doubt this will change the ultimate outcome for the voucher bill. Republicans are addicted to finding new and innovative ways to divert money to private schools.

Monday’s passage of Boyer’s voucher bill was a slap in the face to 1.5 million Arizona voters, one that Republicans administered while hiding behind poor kids.

No, you read that right. The Senate just ignored the will the voters in order to satisfy the will of their benefactors in the school choice lobby.

On Monday, it was all about the poor kids

Senate Bill 1452 proposes a major increase in the state’s Empowerment Scholarship Program, allowing hundreds of thousands of students to snag public money to help pay tuition at private school. This, just a little over two years after voters by a 2-1 margin rejected a similar plan.

If that’s not nervy enough, Republican senators actually had the gall to claim they were expanding the state’s ESA program to help poor children in failing schools.

But children in failing schools – the ones rated D and F by the Arizona Department of Education – already qualify for ESAs, under state law. They already can snag taxpayer money to use as a down payment on private school.

Of course, that assumes their parents afford to pay the difference between what an ESA provides and how much private school costs.

Let’s just be honest here. The vast majority of Arizona’s poor and struggling families cannot afford to shell out the thousands of dollars it would take to jump to private school, even with an ESA in hand.

But this bill isn’t about poor kids

But then again, this bill isn’t really about poor kids. It’s about finding a palatable way for middle-class and well-to-do kids to snag a state subsidy to lower their private-school tuition costs.

The bill is written with a loophole so large that any parent in the state could qualify their child for an ESA.

According to the bill, any child who lives within the boundary of or attends a school that receives federal Title I services qualifies for an ESA. The bill also drops the amount of time a student must attend that Title I school, from 100 days to 30 days.

Given that 65% of the state’s schools receive Title I assistance, that means you’ve pretty much got your pick of schools and you only have to stay a month before moving little Karen on to the private school of your choice.

Democrats were incredulous that ESA expansion is back, given that voters in 2018 rejected a voucher expansion plan passed by the Legislature and signed by Gov. Doug Ducey the previous year. 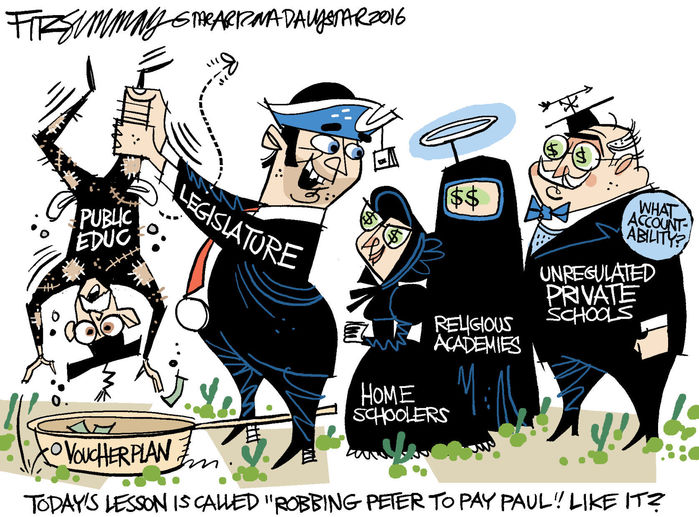 [In 2018, Arizonans considered a ballot measure to block legislation that would have allowed all 1.1 million public school students to apply for ESAs. Voters rejected those universal vouchers by a 65% to 35% margin.]

“We’re going to ignore them once again and we’re going to create the mother of all voucher programs that up to 70% of students will be eligible for,” Sen. Rebecca Rios, D-Phoenix, said. “And the best part of all, we going to do it under the guise of helping poor children and children of color.”

There are better ways to help these kids

The bill passed on a partyline 16-14 vote. Given Tuesday’s reconsideration, it’ll now return for a revote.

It’s supported by the Goldwater Institute, which has been highly successful to pushing for school choice in Arizona.

It’s opposed by several major business groups on the theory that you the strengthen the state and the state’s economy by first strengthening the public schools.

Seems to me if the goal of this bill is truly to help poor children and children of color then there are a couple of ways to fix it.

No. 1. Republicans could add an income qualification to the bill. That would ensure ESA’s really are going to those poor children, the ones that suburban Republican legislators evidently lie awake worrying about each night.

Or No. 2. If the goal is really to help children in failing schools, they could dump this bill and instead swoop in with a targeted plan to fix what ails those failing schools. Spend the money to lower class sizes in those D and F schools. Bring in tutors and counselors and create some public-private partnerships to ensure that every student has a computer and internet access.

More than 9 in 10 Arizona children attend public schools yet our leaders seem to spend all their time trying to figure out how to get a few kids out of them rather than how to get all kids to excel in them.

Call me skeptical, but I’m guessing that those already underfunded public schools aren’t likely to see their lot improve once all the suburban kids are gone.

This is why they are still hoping to overturn the 2020 election for president in Arizona.