You may have been exhausted by the marathon session of arguments for amendments to the McConnell Rules for the Senate impeachment trial of Donald Trump on the first day of the impeachment trial, but as a trial attorney I found it fascinating and brilliant lawyering by the House managers.

It was painfully obvious to me that Team Trump expected House managers to make the dry procedural arguments for witnesses and documents common on motion day, and were entirely unprepared for the House managers using the motion arguments to argue their detailed factual case for the impeachment of Donald Trump for abuse of power based upon the evidence that the House was able to assemble, while simultaneously making the case for obstruction of Congress by Donald Trump and his attorneys for their “total obstruction” of Congress in blocking fact witnesses and refusing to produce any documents.

The first day of Donald Trump’s impeachment trial was a unique opportunity for the president and his legal defense team. After having several weeks to prepare, and with the eyes of the nation upon them, Americans could finally see Team Trump bring its A game, making the best possible case for the president’s innocence.

It didn’t take long, however, before an awkward truth became obvious: Team Trump had no A game to bring. As Jonathan Allen explained in an analysis piece for NBC News, the president’s attorneys “failed him at the opening of his Senate impeachment trial on Tuesday.”

Trump’s squad … chose not to defend his actions with a cogent explanation for them. Rather than rebutting hours of evidence presented by House Democratic impeachment managers, White House lawyers opted to repeat Trump’s attacks on the process and the disjointed set of rejoinders he’s delivered to Democrats in public.

“If you can’t even rise to the challenge of trying to defend your client,” NBC News legal analyst Glenn Kirschner said on NBC News Now, “it becomes painfully obvious that the emperor has no defense.”

I found this shocking. Trump’s lawyers were brazenly lying to the Senate in an impeachment trial with the Chief Justice of the Supreme Court presiding. In a court of law this is a violation of the Rules of Professional Conduct, Rule 3.3 Candor to the Tribunal:

(a) A lawyer shall not knowingly:

(2) fail to disclose to the tribunal legal authority in the controlling jurisdiction known to the lawyer to be directly adverse to the position of the client and not disclosed by opposing counsel; or

(3) offer evidence that the lawyer knows to be false. If a lawyer, the lawyer’s client, or a witness called by the lawyer, has offered material evidence and the lawyer comes to know of its falsity, the lawyer shall take reasonable remedial measures, including, if necessary, disclosure to the tribunal. A lawyer may refuse to offer evidence, other than the testimony of a defendant in a criminal matter, that the lawyer reasonably believes is false.

In a court of law, lawyers who make false, misleading, or frivolous arguments may be sanctioned for violating the Federal Rules of Civil Procedure, Rule 11. They can be disciplined, including disbarment.

But the most shocking part of this was that it was a deliberate “Trumpian” strategy of “Flooding the zone with shit” to force the House managers to use their allotted time to fact check Trump’s lawyers, in order to disrupt their skillfully detailing the factual case for the impeachment of Donald Trump.

When House Judiciary Chairmen Jerrold Nadler finally had enough and called out Trump’s lawyers for their “lies, lies, lies” after the midnight hour — a breach of the Senate’s rules of decorum (one can’t call someone a liar) — Trump’s lawyer Cipollone stood up with wounded indignation and demanded an apology. It is Cipollone who should be apologizing.

Chief Justice John Roberts admonished “both sides, in equal terms” for failing to address the Senate with the proper respect (i.e., following the Senate rules of decorum). The Chief Justice apparently was unmoved by the transparently obvious lies of Trump’s lawyers, or moved to admonish them for their unprofessional conduct. Chief Justice Roberts Indulges Lying, But Draws The Line At Naming The Liar.

It reached a point at which Sen. Pat Leahy (D-Vt.), the Senate’s longest serving member, tweeted during a break, “I would hope later today and in the days ahead, the President’s lawyers remember they are addressing the United States Senate, and personal insults and falsehoods will not serve them well.”

And while it made for an exasperating day – if Trump were innocent, his lawyers should probably have been able to tell the truth – the deceptions weren’t the only problematic part of the defense’s first day at trial.

At one point, Jay Sekulow, one of the president’s controversial personal attorneys, insisted that it should be up to the courts to mediate disputes between the executive and legislative branches, which is the opposite of the argument the Trump administration has argued in the courts for months. Sekulow also pointed to the president asserting executive privilege, which Trump hasn’t actually asserted.

Sekulow didn’t even get the legal basis of executive privilege right.

Much of the defense team’s presentations were a mishmash of conspiracy theories, insults, falsehoods, and an airing of grievances that didn’t go anywhere. The Washington Post’s Jennifer Rubin noted that the proceedings exposed the fact that the president “has no coherent defense – a notion bolstered by the lack of coherent lawyers and absence of serious arguments.”

Cynics will note that this display may have been embarrassing, but it will also likely prove to be inconsequential. It’s a Republican-led Senate, filled with members who are desperate to shield Trump from any kind of accountability, and if the defense team had spent the day peddling gibberish with finger puppets, there would still be 51 GOP senators who’d say, “That’s good enough for me.”

But to the extent that reality still has any meaning, the first day of Trump’s impeachment trial was a disaster for the White House. Given an opportunity to demonstrate the president’s innocence, his lawyers clumsily tried to change the subject, which probably ought to be seen as a bad sign for those concerned with Trump’s guilt.

I would argue the House managers successfully put Senate Republicans on trial. In a series of recorded votes on a party-line vote of 53-47 to table the Democrats’ amendments for witnesses and documents, Senate Republicans turned back every attempt by Democrats to subpoena relevant documents from the White House, the State Department, Office of Management and Budget, the Defense Department and other agencies, as well as testimony from White House officials with firsthand knowledge that could shed light on the core charges against President Trump. Republicans Block Subpoenas for New Evidence as Impeachment Trial Begins.

“Republicans rejected 10 amendments by the same margin. An 11th Democratic proposal, to lengthen the timetable for the prosecutors and defense to file trial motions, gained the support of one Republican, Susan Collins of Maine, but still failed.”

Note: Around midnight, the Office of Management and Budget (OMB) released a trove of documents (redacted) related to Ukraine military aid to American Oversight pursuant to a FOIA request. No matter how much the Trump administration stonewalls, new evidence in the Ukraine investigation will continue to emerge, specifically through the FOIA litigation of American Oversight, other watchdog groups and news organizations. This FOIA litigation and production of documents is ongoing and continuing. One would think the Senate would want to get out in front of the release of incriminating documents that the Senate is now refusing to subpoena in this impeachment trial. 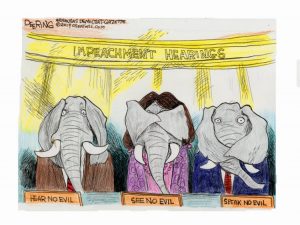 These votes make clear that Senate Republicans are Trump’s accomplices in obstruction of Congress. They are not interested in seeing the evidence or in hearing from witnesses with firsthand knowledge of the core charges against President Trump. Republicans’ only objective is to cover-up the evidence and to prevent the truth from ever becoming public. Republican senators are accessories who are aiding and abetting Trump’s obstruction of Congress and abuse of power. They are equally culpable at law.

Today, Donald Trump confessed to his obstruction of Congress, emboldened by the Senate Republicans’ complicity, boasting at Davos that “Honestly, we have all the material. They don’t have the material.” Trump outright brags he’s withholding ‘all the material’ to beat impeachment: 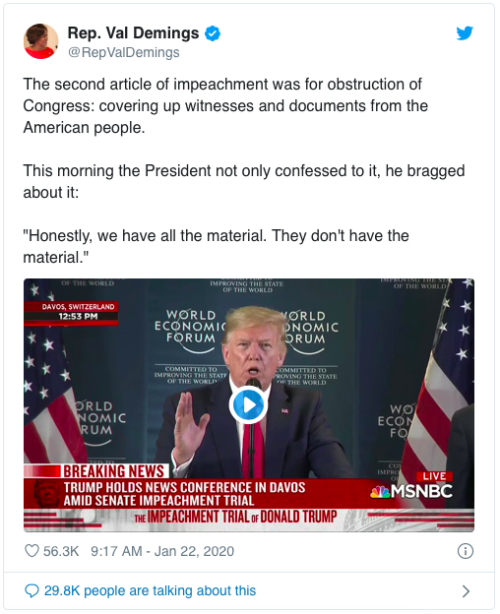 Beyond Rep. Val Demings’ (D-Fla.) callout, her fellow impeachment manager Rep. Adam Schiff (D-Calif.) addressed Trump’s comments in a press conference before the impeachment trial resumed Wednesday. “Well, indeed they do have the material — hidden from the American people,” Schiff said of Trump’s team. “That is nothing to brag about.”

The essential choice facing the Senate is this: Concede the facts presented in the articles of impeachment in the House and limit the Senate “trial” to the legal question of whether such conduct should be allowed, or let the House managers call witnesses and present evidence and allow the president’s lawyers to dispute that evidence.

Writing about impeachment in the Federalist Papers, Alexander Hamilton recognized that “there will always be the greatest danger that the decision [of whether to convict or acquit a president] will be regulated more by the comparative strength of parties, than by the real demonstrations of innocence or guilt.” The Founders considered many options for the trial of an impeached public figure, but, as Hamilton described, in the end they determined “the Senate the most fit depositary of this important trust,” reasoning that senators “will be most inclined to allow due weight to the arguments which may be supposed to have produced [the trial].”

If Senate Republicans vote against impeachment without considering evidence or hearing from witnesses, they will be betraying this trust. The Constitution anticipates strong political passions; but those passions ought not eclipse the Constitution and the duty it entrusts to the Senate to conduct a fair trial.

The House managers have laid the groundwork for the obvious truth that the Senate jury is rigged with Trump accomplices and that an acquittal by Republicans will not be an exoneration, but rather an indictment of a morally bankrupt and corrupt criminal enterprise masquerading as a political party. Republicans must all be held accountable for betraying the public trust.