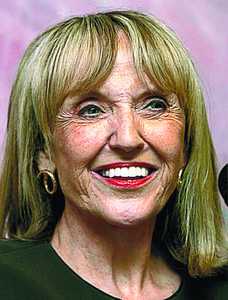 David Safier has done an excellent job of reporting on the developing plan of our accidental governor, Jan Brewer, to hold a special election later this spring to "let the voters decide" on various tax and spending issues. I will add some additional comments.

Let's begin with the obvious. If Arizona does not have enough money in the budget for essential government services, then it does not have money in the budget for an unnecessary and costly special election that will not even begin to address the fundamental problem of our state budget: an outmoded tax structure that is badly out of balance and overly dependent upon the regressive use tax (sales tax). Jan's plan reportedly is to "temporarily" increase the state sales tax, which will only make the state even more dependent upon this regressive sales tax. Really? That's your plan Jan?

The plan almost certainly will not include repealing any of the numerous special interest tax exemptions from the state sales tax, and almost certainly will not include repealing or reducing any special interest income tax credits (for private school tuition and after school programs, for example) that are sacred cows to the GOP. Repealing tax exemptions and income tax credits would bring in about the same amount of tax revenue as an increase in the sales tax, but the special interests will never permit their sacred cows to be subjected to the whim of the voters. (Voter approved measures cannot be reversed by an act of the Legislature).

Then there are the lame excuses given for calling a costly special election in the first place. According to the Arizona Daily Star AZ legislators are cautious on sales-tax election talk:

Taking the issue to the ballot is likely the only way to make it happen.

It requires the votes of two-thirds of lawmakers to increase taxes, and more than a third of lawmakers have signed "no new taxes" pledges.

Let's take each of these lame excuses one at a time. I have previously addressed the two-thirds super majority rule in Goo-Goos Gone Bad: " Prop. 108 (1992). This measure amended the Constitution to require a two-thirds super majority vote of the legislature to pass any increase in taxation levels or a reduction in credits and exemptions." If you want to call a special election Jan, then simply put the repeal of this undemocratic and highly destructive constitutional provision on the ballot. Repealing this provision would restore to the Legislature the fiscal tools it needs to enact badly needed and long overdue comprehensive tax reforms by a simple majority vote.

I have also previously addressed the irresponsible "no new taxes pledge" in Enemies of the State. Arizona Republicans who have sworn their allegiance to Grover Norquist and his Americans for Tax Reform are more afraid of facing a primary challenger from the rabid right-wing fringe of their party for violating this irresponsible tax pledge and being targeted for defeat by Grover Norquist and his Americans for Tax Reform (and the Club for Growth) than they are concerned about honoring their oath of office and performing their constitutionally prescribed duties. Their own partisan political self-interest takes precedence over the best interests of the state of Arizona.

"Punting" the issue to voters for political cover is the hallmark of political cowardice. We have a representative democracy, not a direct democracy. We pay our legislators (sort of) to make hard choices and to make decisions for us – that is what we elect them to do. There have been far too many initiatives and referendums on the ballot in recent elections because our cowardly legislators do not want to make the hard choices and be held accountable by their constituents. "Don't blame me, blame the voters, they're the ones who voted for it" is their lame defense. Arizonans may as well institute a form of direct democracy by setting up a "vote by phone" system to allow the citizens of Arizona to vote directly on issues like they do for their favorite American Idol contestant. Why do we even have a Legislature if it is not going to do its job?

The real reason for this special election, however, is more nefarious. It is not about raising the sales tax (Jan knows this will be rejected by the voters). No, this is really about convincing the voters to remove the legal protections from voter approved special funds so that the Legislature can raid the special funds. As reported by the Arizona Republic Governor may put a tax hike to the voters:

The state's fiscal woes are compounded by the 1998 Voter Protection Act. It requires a three-quarters vote of the state House and Senate before lawmakers can make changes to laws approved at the ballot, and any change may only "further the intent" of Arizona voters.

That means voter-approved initiatives such as First Things First are largely off-limits to legislative cuts. In 2006, First Things First succeeded in getting Arizona voters to approve an increase in tobacco taxes to fund a series of programs for early-childhood education. As of the end of fiscal 2008, the programs had more than $230 million in their coffers – funding now being eyed by Brewer's allies and legislators looking for alternatives to deeper cuts in other state services.

If the ballot proposal being pondered by the Governor's Office was approved by voters, legislators would have access to the First Things First funding, as well as other voter-approved ventures ranging from land conservation to the state's Clean Elections system.

Finally, Arizona has a "single subject" rule for ballot measures. This means that voters would be presented with a "cafeteria plan" of confusing ballot options. Conceivably the passage of any one ballot measure could be made contingent upon the passage of another ballot measure so that the defeat of any one measure would spell defeat for the entire plan. Alternatively, voters may selectively protect certain special funds from being raided by the Legislature and not others and reject the sales tax increase, which would leave the state still short of tax revenues. So what was the point of the special election? The cost of the special election would only have put the state even further into the hole.

All in all, the Jan scam tax plan is a terrible idea. Arizona will not solve its budgetary problems until our Legislature decides to get serious about enacting badly needed and long overdue comprehensive tax reforms. But our Republican legislators are ideologically opposed to "do the right thing." And there, dear Brutus, is where the fault lies.