Upwards of 75% of Arizonans cast their vote by early mail-in ballots.

Voters must return their mail-in ballot by Wednesday, October 31. According to the Arizona Daily Star today:

Approximately 185,500 completed ballots — roughly 45.5 percent — had been returned to the Pima County Recorder’s Office as of Saturday.

What are you waiting for? Tick-tock people!

This Wednesday, Oct. 31, is the last day for Arizonans to mail in their early ballots for the Nov. 6 general election.

Ballots mailed after Wednesday may not arrive in time to be counted on Election Day.

The vast majority of Arizonans, about 75 percent, typically cast a ballot by mail. For those ballots to be counted, election officials must receive them before polls close.

Voters on the Permanent Early Voting List should have already received their mail-in ballots. It’s too late to request another mail-in ballot for this election, but you can still vote in person.

When sending in a ballot, don’t forget to sign the front of the envelope. Unsigned ballots aren’t counted.

You must sign the affidavit on the envelope, in the designated box, to attest that you are the registered voter whose ballot is contained inside.

County recorders verify each signature to ensure it matches the signature on a voter’s registration.

In case you are concerned about your ballot being rejected over a signature mismatch because of news reports coming out of Georgia about its voter suppression efforts, the ACLU of Arizona just put your concerns to rest.

Yesterday, in response to letters sent by a coalition of Arizona groups, Maricopa County Recorder Adrian Fontes announced that he has agreed to adopt and implement a new early-ballot signature policy. This new policy will permit all voters to cure problems with their signature, even those whose ballots are received on or just before Election Day. If a mismatched signature problem is not identified by officials or resolved prior to the close of polls on Election Day, those early ballots will be treated as conditional provisional ballots. All ballots must be received by 7 pm on Election Day to be afforded this opportunity. Recorder Fontes’s office will provide notice to all affected and voters will have up to five business days to confirm their signatures.

Now, in at least Maricopa, Coconino, and Pima counties, voters can correct signature mismatch errors by contacting their recorder in the days following the election. Voters who have cast early ballots should track the status of their early ballot online at this website.

The Campaign Legal Center, ACLU, ACLU of Arizona, and Scharff PLC worked to reach this agreement on behalf of a coalition of Arizona groups: League of United Latin American Citizens-Arizona, Arizona Advocacy Network Foundation, League of Women Voters-Arizona, and All Voting is Local-Arizona.

The lawyers assisting the coalition released the following statement:

“We are pleased that voters in Arizona’s three counties—including the two most populous counties in Arizona—will not have their absentee ballots rejected because officials are not ‘satisfied’ that the signature on the ballot matched the voter’s registration signature. These counties are leading the way to ensure that Arizona voters get due process by giving all voters a chance to confirm their signature. We hope that other counties follow suit and the Secretary of State will finally issue concrete guidance on this issue. We look forward to working with Recorder Fontes going forward and monitoring the details of the policy as it’s finalized next week.”

If you forget to mail ballot in time

Don’t despair if you forget to return your mail-in ballot by Wednesday.

You won’t be able to mail your ballot, but you can drop still it off in person. Completed mail ballots can be returned at any polling place in your county before 7 p.m. on Election Day.

To find a polling place near you, visit the Arizona secretary of state’s website.

Ballots can also be returned to the county recorder’s office in the county where you live. Information on office locations is also on the Arizona secretary of state’s website.

Make sure you place your ballot in a designated ballot-return box.

If your mail-in ballot was lost or damaged, you’re still eligible to vote in person on Election Day. To vote in person, you must go to your assigned polling place or a voting center.

Ballots can be dropped off or a replacement ballot can be requested at the Pima County recorder’s locations. They are located at:

Also open this week are satellite locations operated by the county recorder in libraries and other government facilities. Hours vary by location. They include:

If you encounter problems voting or feel that you are being denied your right to vote, you can contact the Lawyers Committee for Civil Rights Election Protection hotline: 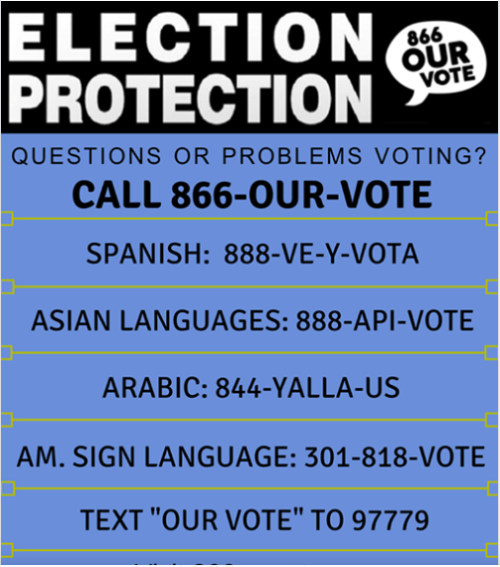