Last week, Donald Trump was once again bloviating that “We’re looking at that very seriously, birthright citizenship,” he told reporters outside the White House, echoing his administration’s previous vow to unilaterally end the process by which babies born in the country automatically become citizens. The President did not elaborate on what he meant. 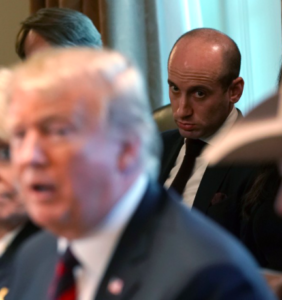 That would be because he’s talking out his ass again. “Birthright citizenship” is guaranteed by the 14th Amendment: “All persons born or naturalized in the United States and subject to the jurisdiction thereof, are citizens of the United States and of the State wherein they reside.” There’s not a damn thing he can do about birthright citizenship without a constitutional amendment to amend this clause in the 14th Amendment, and that’s never going to happen.

So to be a dick about it, Trump is now using birthright citizenship to deny citizenship to children born overseas to certain members the Armed Forces or the federal government serving their country, based upon a U.S. residency requirement. Trump administration ends automatic citizenship for some children of military, federal workers born abroad:

Children born overseas to some American parents serving in the military or working for the federal government may no longer automatically claim U.S. citizenship if their parents had lived in the United States for less than five years, according to a new memo posted by U.S. Citizenship and Immigration Services (USCIS) on Wednesday:

USCIS no longer considers children of U.S. government employees and U.S. armed forces members residing outside the United States as “residing in the United States” for purposes of acquiring citizenship under INA 320.

Instead, officials said, those parents must apply for citizenship on behalf of their children before they turn 18 years old.

U.S. Citizenship and Immigration Services, which processes citizenship applications, said it rescinded a policy that had allowed some members of the military and government employees to easily transmit citizenship to children born overseas, because it conflicted with other policies and federal law.

The USCIS has issued a clarification of its policy. It is essentially targeting children born to non-U.S. citizen parents, making the process of getting citizenship for them harder, but it does still affect a small number of U.S. citizens:

This policy does not affect children born outside the United States who were citizens at birth or who have already acquired citizenship, including children who:

The policy takes effect on Oct. 29 and applies only to children born afterward, officials said.

Acting USCIS director Ken Cuccinelli said the new policy does not affect people who were born and raised in the United States.

But it can: it makes the citizenship process more difficult, and there is no guarantee that the government will approve citizenship applications.

The Trump administration has cracked down on immigrants in the military, all but shuttering a program that recruited immigrants with key language and medical abilities and expelling some recruits because of their family backgrounds. President Trump and past administrations have also faced criticism for deporting veterans, generally those who had been convicted of crimes, including minor offenses.

Some immigration lawyers said there is no guarantee that the government will approve citizenship applications.

Martin W. Lester, an immigration attorney in Chattanooga, Tenn., and chair of the American Immigration Lawyers Association’s military assistance program, said children born overseas to U.S. citizen parents usually can automatically claim citizenship as long as their parents had lived in the United States for five years, including for two years after they turned 14.

In the past, he said, federal immigration officials created exceptions for members of the military and government employees who did not meet that [residency] standard because they left the United States to serve the U.S. government overseas.

Now, he said, the new rule creates “second-class” citizenship for those parents who left before the five-year mark to serve the United States abroad.

“I don’t understand how changing this policy makes America safer by telling its servicemen and women and its government employees that it’s going to make it harder for their children to be Americans,” he said. “Who possibly thought that this was a good idea?”

Officials said the existing policy conflicts with State Department guidance and a 2008 law, leading to confusion when issuing citizenship decisions. To obtain citizenship, these parents must apply for citizenship on their child’s behalf, by filling out a form and meeting other requirements.

Donald Trump was the leader of the “birther” movement against Barack Obama, falsely asserting that he was born in Kenya. Trump also has a fixation with attacking the late Senator John McCain, who was born to U.S. citizens, his father serving in the U.S. Navy while stationed in the Panama Canal Zone territory. There was a very real ‘birther’ debate about John McCain (regarding Article II, which specifies that “No person except a natural born Citizen” can be president).