A day after the Trump administration conceded defeat on 2020 Census, our “Dear Leader” is now contradicting his cabinet officials and threatening to defy the U.S. Supreme Court in a blind Twitter rage. Trump Vows to Move Forward With Citizenship Question on Census:

President Trump said on Wednesday that the Commerce Department is “absolutely moving forward” with plans to add a citizenship question to the 2020 census, contradicting statements made by his Department of Justice and Wilbur Ross, the Commerce secretary, and calling reports based on them “fake.” 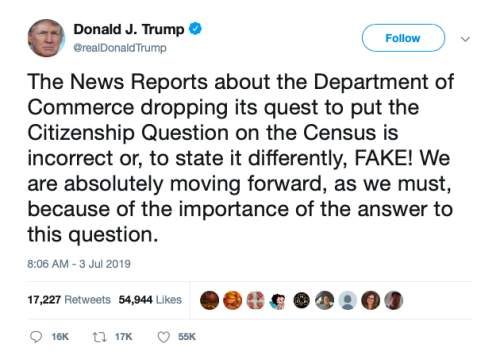 An official notification from the Department of Justice to the lawyers for the litigants in the census case is not “fake.” Donald Trump’s Twitter posts are “fake.” 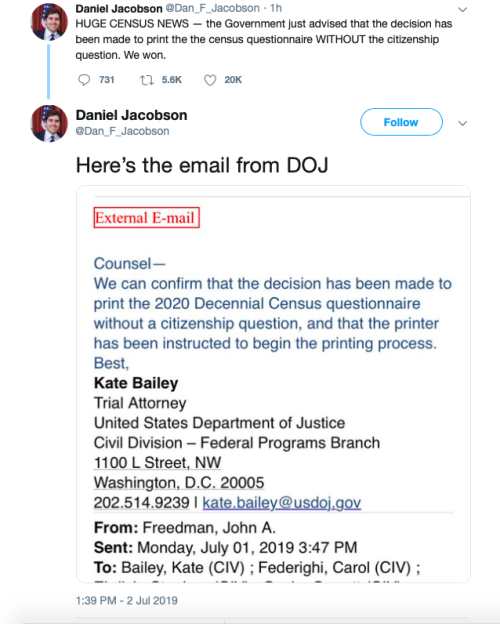 On Tuesday, the Justice Department said that the census was being printed without the citizenship question and Mr. Ross said that he was heeding the court’s ruling.

It was the second time in two days that Mr. Trump said he was directing the Commerce Department to defy a decision made by the Supreme Court last week that blocked the plan, which critics contend is part of an administration effort to skew the census results in favor of Republicans.

Mr. Trump’s statements notwithstanding, both the Justice Department and the Commerce Department have stated in writing that the next census will not include a question on citizenship.

Mr. Ross said in a statement on Tuesday that “the Census Bureau has started the process of printing the decennial questionnaires without the question.” And in a teleconference on Tuesday conducted by the federal judge overseeing two Maryland lawsuits on the issue, Justice Department lawyers confirmed that the government would take no further legal steps to add the citizenship question to the questionnaire.

This would appear to be yet another example of cabinet officials ignoring the lunatic ravings of our madman Twitter-troll-in-chief. Donald Trump’s aides ignore his orders, hoping he will forget. As Trump would tweet, “SAD.”

The administration itself had argued to the justices only this month that legal challenges to the question had to be resolved because the printing of census forms could not be delayed past early July. But the only avenue the court left open to restoring the question — producing and winning approval of a new explanation justifying it — would have taken weeks, if not months, to complete.

A Commerce Department spokesman did not immediately respond to a request for comment.

UPDATE: I guess I spoke too soon. “The Justice Department reversed course Wednesday on whether the 2020 census will be printed without a question on citizenship, after President Donald Trump tweeted out a statement contradicting his own government’s position.” Justice Dept. reverses course on census citizenship question after Trump’s tweet:

In a Wednesday afternoon conference call with U.S. District Judge George J. Hazel of Maryland pressed DOJ lawyers on how they would square the president’s tweet saying the government was “absolutely moving forward” in including the question, with the government’s position announced just a day before that there would be no citizenship question on the 2020 census.

“We at the Department of Justice have been instructed to examine whether there is a path forward, consistent with the Supreme Court’s decision, that would allow us to include the citizenship question on the census,” assistant attorney general for the Justice Department’s civil division Jody Hunt said on the call. “We think there may be a legally available path under the Supreme Court’s decision. We’re examining that, looking at near-term options to see whether that’s viable and possible.”

At the start of the call, Justice Department special counsel Joshua Gardner admitted to the court that the president’s tweet contradicted their earlier position and that they were still sorting out how to respond.

“The tweet this morning was the first I had heard of the president’s position on this issue, just like the plaintiffs and your honor,” Gardner said. “I do not have a deeper understanding of what that means at this juncture other than what the President has tweeted. But, obviously, as you can imagine, I am doing my absolute best to figure out what’s going on.”

However, Gardner added that the Census Bureau has not stopped its current process of printing the census without a citizenship question, as the government continues to weigh what options it may have.

Hazel ordered the government to make clear whether the citizenship question would appear on the census by Friday or tell the court how it plans to move forward to comply with the Supreme Court’s ruling.

Judge Hazel made note of the contradiction in the Wednesday conference call, and pressed the government’s lawyers on how he could trust that they officially speak for the president moving forward.

“”If you were Facebook and an attorney for Facebook told me one thing, and then I read a press release from Mark Zuckerberg telling me something else, I would be demanding that Mark Zuckerberg appear in court with you the next time because I would be saying I don’t think you speak for your client anymore,” Hazel said.

When is Trump sycophant Vice President Mike Pence going to do his constitutional duty and convene the cabinet to invoke the 25th Amendment to remove from office what is clearly a madman suffering from delusions and detachment from reality? I briefly had my hopes raised yesterday when Mike Pence was called back to White House after abrupt trip cancellation. Aaargh! End our national nightmare already!

And a note to House Speaker Nancy Pelosi: isn’t defiance of a U.S. Supreme Court decision enough for you?