There have been numerous reports in recent weeks speculating about whether or not the youth vote will turn out in a midterm election. Historically, they do not. This election, however, may be different. 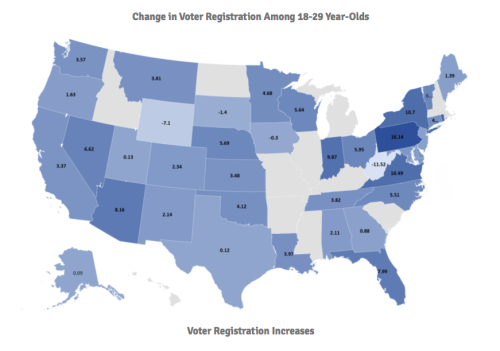 They were aiming to register 15,000 new young voters this year and instead netted more than 21,000.

But history isn’t on their side — younger voters have the lowest turnout rates in Arizona.

A report from the Morrison Institute for Public Policy found only 19 percent of votes cast in the 2016 election in Arizona came from Millennials, while 37 percent came from Baby Boomers, despite the fact that there are more Millennials than boomers here.

Only 29 percent of Arizona Millennials voted during the 2016 election, the report said.

To illustrate this point, here is the Census age distribution pyramid for Arizona. 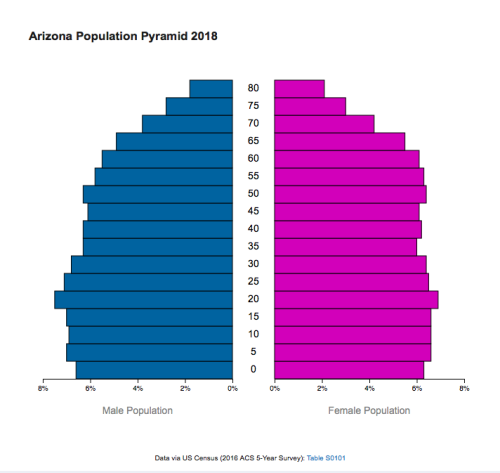 Now look at the Arizona Secretary of State data for early ballot returns by age so far in 2018. 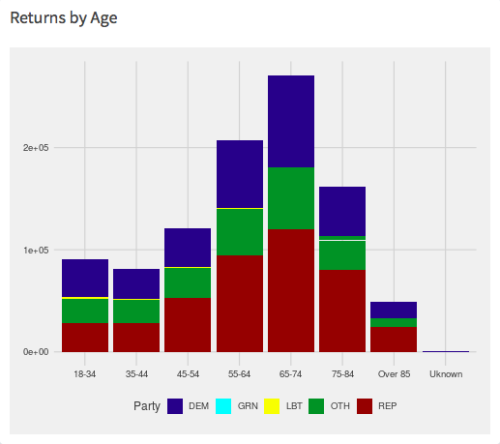 It is largely older voters age 55+ who are dominating the early ballot returns.

The 18-54 age groups, those voters who are going to college, starting careers, starting businesses, starting families, raising children and sending them to Arizona schools and colleges — the voters who have the most at stake from the actions taken by the Arizona legislature — are not voting early in numbers that reflect their larger proportion of the population in Arizona.

This is why we cannot have nice things in Arizona. The 18-54 age groups are allowing old people to decide their fate for them. If you don’t want old people deciding your fate, it is time for you to stand up and to be counted by casting a ballot.

John Della Volpe, director of polling at the Harvard Kennedy School Institute of Politics, says there are signs for optimism before election day. The young don’t vote? This time they will. And school shootings are the difference.

According to the United States Elections Project, in five of the previous eight midterm election cycles, between 18 and 20 percent of Americans under 30 voted; in the other three years (2014, 1994, 1986), 16 percent to 21 percent showed up. Voting at less than half the rate of older adults, young Americans representing the baby boomer, Gen X and millennial generations did their part to earn the irrelevance assigned to them by most of our leaders in Washington.

That is about to change.

In a poll released today by the Harvard Institute of Politics, where I am polling director, we find that Americans under age 30 are 54 percent more likely to vote than they were in our 2014 midterm polling. Forty percent tell us they will vote in the midterms next week. While young voters generally overestimate their actual rate of participation by 7.5 points on average, by almost every measure, we are likely to witness an election for the ages. Compared with 2014, engagement from young Democrats is 24 percentage points higher (30 percent likely to vote in 2014 compared to 54 percent today), and Republicans are quickly closing the gap as they try to match that intensity. Six months ago, 36 percent of Republicans expected to vote, and in the weeks after the hearings to confirm Brett M. Kavanaugh to the Supreme Court, that percentage increased to 43 percent. We find that white females with a college education are a primary driver of enthusiasm on the left. Compared with 2014, this demographic group is 25 points more likely to vote next Tuesday; their white college male counterparts are only 7 points more likely to turn out. And not only are they more engaged than in 2014, but white females with a college degree also prefer Democratic control of Congress by 34 points, three times the 11-point margin Democrats benefited from with this cohort four years earlier.

From a menu of 16 prominent issues developed by younger voters for a project I directed over the summer, views related to school shootings were most highly correlated with likelihood to vote. To my surprise, a full 55 percent rated school shootings a 7 on a 1 to 7 scale of importance; a combined 71 percent rated the issue a 6 or 7. The second and third issues strongly correlated with voting in November were health care and gun violence.

The level of interest in voting feels more like a presidential election cycle than a midterm. Issues alone do not lead to youth voter turnout. Changes in attitude must come first, and our studies show that there is a new attitude about the efficacy of political engagement that matches interest in issues that disproportionately affect the current young generation. That’s why I am confident that the underlying factors are in place for what Teddy Landis, the student chair of the Harvard Public Opinion Project, refers to as a “youth wave.” It is 19 years of study, and tracking what can be subtle shifts over time, that gives me this assurance. These factors were not in play in 2014 or 2016. Hundreds of thousands of new voters have been persuaded to register in critical states … Our polling indicates 43 percent of all 18- to 21-year-olds indicate that they have been encouraged recently to register.

“Regardless of outcome, young Americans are as engaged in midterms as they have been in decades.”

Throughout the country, there are signs that young Americans are taking an unusual level of interest in this year’s midterms, prodded by Democratic groups and nonprofit organizations that have spent millions urging them to see state and congressional elections as outlets to express their views. Pushing for a ‘youth wave’: Can Democrats channel dissent into action at the ballot box?

The share of 18- to 29-year-old voters who say they will definitely vote has jumped from 26 percent in the run-up to the last midterm election in 2014 to 40 percent this fall, according to a new poll released by the Institute of Politics at Harvard University’s Kennedy School of Government. One driving factor: widespread support for government intervention to curb gun violence and reduce college debt and health-care costs.

Whether that will translate into a substantial youth turnout this year remains an uncertainty as Election Day nears. The outcome will serve as a test of this cycle’s costly efforts to channel expressions of dissent into action — and could determine whether Democrats succeed this fall.

“From a civic point of view, they’ve been more engaged” this year, said Guy Cecil, who leads Priorities USA, a Democratic super PAC that has inundated social media platforms with ads targeting young voters. “But can we turn their enthusiasm into electoral power?”

A national analysis by the Democratic data firm TargetSmart shows voter registration — and voting in primaries — has risen slightly nationally among young voters since the school shooting in Parkland, Fla., last February.

In Pennsylvania, youth voters have made up nearly 60 percent of all new registrants, Target­Smart reported in September. The share of the electorate that is under age 30 has grown since 2017 in several key states, including Nevada, North Carolina and Florida, according to state voter registration data tracked by the firm L2. In Virginia, requests for student absentee ballots, at about 30,000, are about 50 percent higher than in last year’s gubernatorial election [which was a big win for Democrats.]

Antipathy for President Trump and a desire to see action on gun control, economic assistance, health care, environmental protection, immigration and racial equality have propelled many to take interest in the midterms, according to young voters and campaign strategists working to mobilize them.

And they are also being lobbied hard to turn out.

Cecil’s Priorities USA has devoted much of a $65 million campaign on ads targeting young people, with hundreds of spots on online platforms such as Hulu, Facebook, YouTube and Spotify in House, Senate and governor’s races throughout the country.

NextGen America, the liberal group founded by billionaire hedge fund manager Tom Steyer, has hired 125 staff members who are rallying young people to vote on more than 40 college campuses throughout Florida. And deeply personal appeals are being made by survivors of the Parkland shooting, who are traveling the country urging voters their age to help curb gun violence by voting.

Meanwhile, celebrities such as Taylor Swift are urging their fans to pay attention to the midterms, and Turbovote, a nonpartisan application “that makes voting easier,” has claimed credit for registering more than 400,000 users of the social media giant Snapchat.

There are plenty of reasons for skepticism about an age group that typically performs dismally at the polls.

Midterm performance is typically far worse: Just 16 percent of young Americans cast ballots in 2014. The highest midterm turnout among voters under 30 in the past three decades was a mere 21 percent in 1994.

Even if youth turnout does increase dramatically this year, the age group has limited reach in the voting pool.

NextGen has registered more than 50,000 new young voters throughout the state this cycle, according to NextGen spokeswoman Maya Humes. (In all, nearly 1 million voters of all ages have registered in Florida since 2016, according to state records.)

The Feb. 14 shooting at Marjory Stoneman Douglas High School in Parkland, which left 17 people dead and 14 injured, also appears to have boosted young people’s interest in the midterms.

Young voters made up about a quarter of Florida’s new voter registrants in the 2½ months before Parkland, but their share jumped to 34 percent in the 2½ months after the shooting, according to the Miami Herald.

“When it’s close to home like that — or is your home — you don’t want to sit back and do nothing,” said Campbell, the psychology major, who attended Stoneman Douglas and knew some of the victims. “I’m not saying take all guns away. But something has to change.”

March for Our Lives, the nonpartisan organization of Parkland students formed in the wake of the shooting to advocate for gun restrictions, has visited every congressional district in Florida on its Road to Change bus tour — and then traveled to more than 24 states over 60 days registering young voters. More than 100 local chapters have formed throughout the county.

“The real test is going to be Election Day,” said David Hogg, a founder of March for Our Lives, in a telephone interview from Minneapolis. “Young people and Americans in general are angry. Americans are inspired to go out and make this change. And this is just the beginning for a lot of young people.”

“People are asking, ‘Is there going to be a blue wave and how big is it?’ ” said Teddy Landis, 21, a Harvard junior who helped write the questions for the Harvard Institute of Politics survey, which the institute has been conducting for 19 years. “But we actually think there’s going to be a ‘youth wave.’ ”

If you are a registered voter in the 18-54 age groups, you hold your fate in your own hands. Your ballot is your voice. If you do not exercise your right to vote, your silence is consent, and surrender. Make your voice heard by voting.