Some 300 people packed Catalina High School yesterday night for the CD2 Congressional Democratic candidate forum held May 3, 2018, by the Represent Me AZ grassroots PAC. Here are the high points: Get your free subscription to “Getting Active in Local Politics” at http://eepurl.com/dmzvUb – sent out every Sunday morning.

Like at other forums, all the candidates had similar platforms and support the same progressive policies, including Medicare for All, gun safety, a path to citizenship for DACA recipients, increasing taxes on high-income individuals, fighting the opioid epidemic, and opposing Trump’s border wall.

Yuksel, however, stood out and brought an enthusiastic contingent of supporters in orange T-shirts. Regarding the opioid epidemic, he says, “The war on drugs has gotten us nowhere. Where is the war on Big Pharma?” He added, “One life lost to opioids is an indictment of ourselves. What we do as a nation will be there for generations to come. Do we lock up opioid users into prison or care for them and say it’s a social health problem and rally behind it. It is a problem. It’s our failure if we don’t address it.”

He called for campaign finance reform, starting with filling two vacant seats on the Federal Election Commission. “There is a systemic problem in Congress, and it’s campaign finance. Both parties complicit in it. This government is not responsive to the electorate — it’s the special elite that controls the economy. Until we change campaign finance, candidates will have ulterior motives that they’re shackled to. You don’t want Congress members spending all their time fundraising and attending cocktail parties.”

Yuksel entered the race only a month ago but said he already had half the signatures he needs to get on the ballot. “Getting signatures is not the hard part of our campaign. We’ve been in the race for almost a month and we’ll get it done,” he said to loud applause.

Regarding immigration, he says, “The wall won’t solve the problem. The problem is not the border. The problem is economic despair and suppressed civil rights in countries to the south of us. If we can solve that problem we won’t need the drones or checkpoints. I’m the son of immigrants. My mother came here because an Ayatollah took over their government. The only difference between you and me and the Dreamers is a piece of paper — and that’s Congress’ fault.”

Yuksel says his heritage is Persian, Turkish and Kurdish. He has a law degree from UA and a Masters in Chinese law from China’s top University.

“I bring that local and international experience back here. China is pivoting with its One Belt-One Road initiative,” connecting it to Europe, Southeast Asia, and Russia. “We have similar opportunities and squandered them. We need people who know China. Why can’t we have high-speed rail? Let’s get it done. We’ve got to increase solar energy production. We bring a new generation, new ideas, and we’re ready to do this together.” 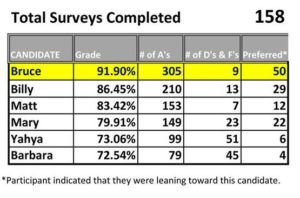 Bruce Wheeler was the audience favorite at the May 3 candidates forum, according to a survey by Represent Me AZ.

Wheeler called for eliminating fossil fuel subsidies. “In this state, we don’t have any subsidy for solar. I’d also invest in infrastructure. We don’t have a longer-term economic plan that addresses jobs and infrastructure. Trump gets elected and tried to dismantle everything we’ve done progressively.”

Kovacs emphasized supporting small business. “We need to take older buildings and communities and pull them out of poverty with non-gentrification measures. I’m in four working groups to make sure it’s done. I want to restore the Main Street of this economy, and bring back small business to southern Arizona because that builds our economy.”

Matiella called for restoring the recent 25% cut in funding for the Small Business Administration. “I would push to fund the Small Business Administration so it can provide a backup to small businesses. Most small businesses are women-owned. It is important to support this social element and encourage women to be business owners. We also need to support research and development through federal subsidies, tax breaks or tax credits.”

Kovacs called for expanding small business loans through the USDA. “We employ 15 people in our vineyard in Sierra Vista. We can create more jobs if we expand that industry.” He added, “medical marijuana companies are buying  defunct property down there and building hydroponic grow houses. If you want to be like Colorado and get $60 million in taxes, that’s how you get into [the marijuana] industry.”

Heinz echoed the call to build solar energy generation. “We have amazing talent at UA. By harnessing that innovation, we should be able to enough photovoltaics to run most of the state and most of North America. New Jersey actually beats Arizona in the portion of energy it generates from the sun, and so does Germany. These are both cloudy places — and we’re behind them.”