The Department of Justice came to the Supreme Court today, asking the justices to put on hold the disclosure of grand jury materials from the investigation by Special Counsel Robert Mueller, who in March 2019 submitted a report on possible Russian interference in the 2016 election. The U.S. Court of Appeals for the District of Columbia Circuit upheld an order by a federal trial court that would require the disclosure to the House Judiciary Committee of portions of the Mueller report that had been redacted, along with grand jury transcripts and materials that had been kept secret. Unless the Supreme Court steps in, the government told the justices, “the government will have to disclose the materials on May 11, 2020, which would irrevocably lift their secrecy and possibly frustrate the government’s ability to seek further review.”

The government’s request went to Chief Justice John Roberts, who handles emergency appeals from the District of Columbia. Roberts can rule on the request himself or, as is more likely, refer it to his colleagues.

UPDATE: On Friday Chief Justice John Roberts temporarily blocked the release of the grand jury materials and ordered the House Judiciary Committee to respond by Monday, May 18, at 3 p.m. EDT. The committee had not opposed the temporary hold, known as an administrative stay, to give the court time to review the government’s request.

Lawfare Blog reports “The Justice Department announced that it will file a petition for a writ of certiorari in In re Application of the Committee on the Judiciary, the Judiciary Committee’s effort to obtain grand jury material relevant to the Mueller Report.

Attorney General William “Coverup” Barr will do anything to prevent the Special Counsel’s grand jury materials from going to the congressional oversight committees. 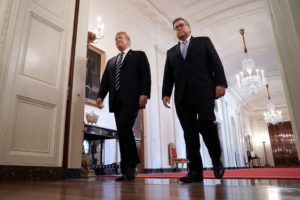 Only William “Coverup” Barr obstructed Congress, telling them “No, you can’t have it,” and would not assist in obtaining court authorization to produce grand jury materials to the House Intelligence Committee sitting as the impeachment committee prior to Donald Trump’s impeachment.

The U.S. Supreme Court should follow established precedent, and reject DOJ’s motion for a stay, and it should deny its writ of certiorari. This abuse of power and obstruction of justice must end.

Should the Supreme Court grant DOJ’s writ of certiorari, it will be a sign that we are now living in a dangerous new world where established precedent and the rule of law no longer matter.